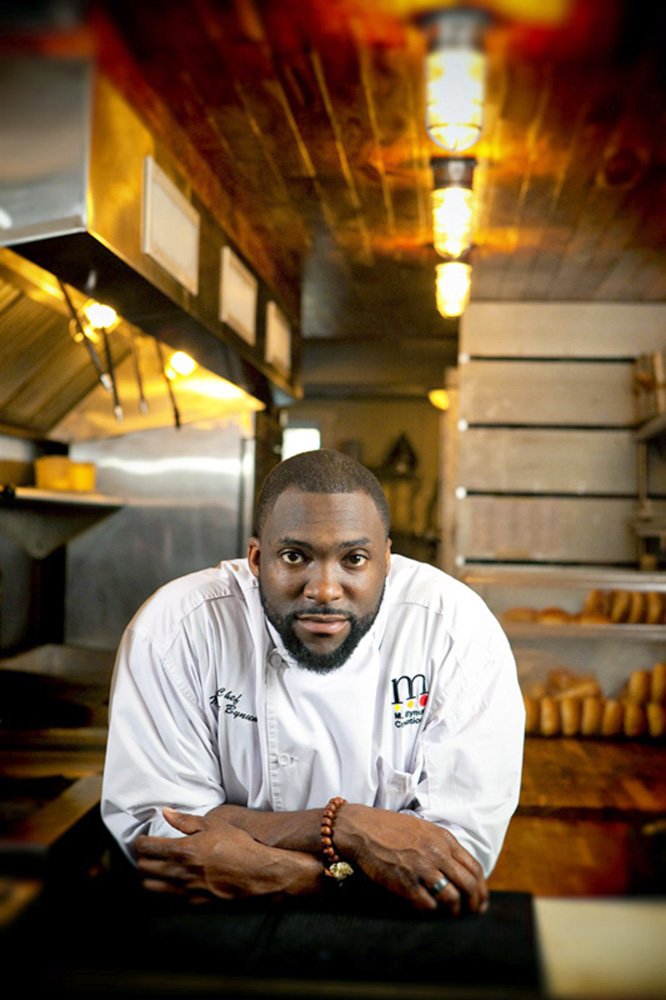 Marc Anthony Bynum was able to make a prize-winning dish out of the ingredients in the “mystery basket” — matzah, salty peanuts, dried strawberries, and cocoa nibs — to win the Food Network’s TV show Chopped in June 2010.

Two months later, he returned to the show for a second time, where he excelled through the appetizer round with a combination of dandelion greens, Greek yogurt, liverwurst and catfish, which allowed him to move forward through the entrée and dessert rounds to win. But it was the combination of geoduck, Buddha’s hand, black radishes and waffle cones that did him in when he appeared in the grand finale of the Chopped Tournament in September that year.

This was okay with the 35-year-old Farmingdale native. “You learn more in defeat than victory,” he said as his appearance on Chopped moved him forward in his goal to invoke change and help people. He sees himself as a “food missionary” and the new restaurant he’ll be opening soon on Main St. in Farmingdale can be a way to put forth his values. “I love the town,” he said.

Having his restaurant in Farmingdale means he can have access to all the schools he attended, including BOCES where he received his formal culinary training. He likes to mentor kids and wants to serve as an inspiration.

For Bynum, being a chef appears to be the perfect career. He said that if he had a desk job, he’d fall asleep. Cooking is not a just a job, he says. “When I work for 18 to 36 hours, it feels like a minute.”

His love of cooking started with the homey, Southern-style cooking of his mother Arnetta Williams.

Favorite dishes were collard greens, black-eyed peas and rice, sweet potato pie and spinach pie. There were seven in the house — Bynum being the middle child of five — and there was always dinner at the table. “The love has carried over,” he said, “You can always feel the love in the dish.”

He is passing that appreciation on to his family, where his three year old has expressed an interest in cooking. Bynum has worked at the Melville Marriott, the Vanderbilt in Plainview, Four Food Studios, Prime, Tellers and Venue 56. He has a consulting business helping start up or troubled restaurants.

“They’re successful when they listen to me,” he said. His hot sauce, called Sette — which means seven in Italian because it has seven different peppers — is shipped throughout the country. And then there’s his charity work. He is heavily involved in the American Heart Association and Power to End Stroke as a national ambassador, and he recently became a leader in helping young adults combat obesity through PreventObesity.net.

Bynum is spending much of his effort now getting his own restaurant in shape by the end of May. He said that after 7 to 8 years of looking for a spot to open up along Farmingdale’s Main Street, he will finally get his chance. On April 7, Bynum received a permit from the village Board of Trustees, to officially get to work on setting up his 27-seat restaurant, called Hush—an appropriate name for a restauranteur who says the food speaks to him. “It’s a polite way to say ‘shut up,’” said Bynum. “I listen to what the food is saying.”

Local, sustainable and organic are concepts he embraces. “I’m big on Long Island with our wines, cheese and farms and want to make sure it stays local,” he said. Even the décor and furniture in the restaurant is Long Island-based; 75 percent of the wood is reclaimed wood from Hurricane Sandy. The tabletops are repurposed old Singer sewing machine consoles.

He likes to categorize his cuisine as “great food, executed perfectly.” He’s going for New American cuisine but is not limited to that. His burger and ribs will always be on the menu but the dinner choices will change regularly based on the market.

For the moment, Bynum has had enough of food competitions — although trying for Top Chef sometime in the future is on his agenda, and perhaps, buying a farm so he can have control over the farm-to-table aspects of his work.

In case you were left wondering what Bynum had concocted with his Chopped mystery baskets, he made a matah Napoleon with strawberry mousse. With the dandelion greens, liverwurst and catfish he did a play on the traditional “Surf and Turf,” which he called “Liver and River.” It featured pan roasted catfish with dandelion greens and yogurt sauce. About his mystery dish, he says, “I honestly don’t remember. This is the round I lost and I really blacked it out.”