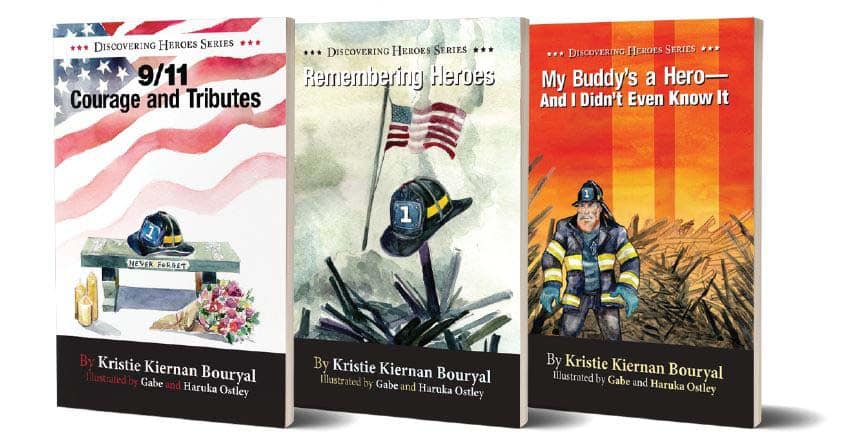 Kristie Kiernan-Bouryal was working in Manhattan on September 11, 2001.

As she arrived at work to news that hijackers had crashed a pair of planes into the Twin Towers of the World Trade Center, she knew immediately her world had changed forever.

“I remember when I saw the first plane hit I thought ‘this doesn’t look like an accident’,” Kiernan said while fighting through tears 18 years after the fact. “Then when I saw the second plane hit, I got a knot in my stomach. I can’t believe this is happening, America’s under attack.”

More than a decade and a half after the fateful day when the towers fell, the Staten Island native became concerned with what she saw as a failure to educate the children raised in the wake of 9/11 about the importance of that day in American history. She quizzed her nieces and nephews, looking to see what information their teachers had passed on, and found it sorely lacking.

Soon after that, she decided to take matters into her own hands, and began work on the Discovering Heroes series of children’s books about the events surrounding September 11. This year saw the publication of the final two books in the three-part series Kiernan geared towards helping to educate an audience without strong memories of 9/11.

“We said we’d never forget, but that takes action on our part,” Kiernan said. “What I hope to do with these books is put power in the hands of every adult out there to make sure that day is not forgotten. I hope these books will help them to achieve just that.”

Besides imparting a stronger knowledge of recent history, Kiernan wanted the books to stand as testaments to the legendary feats of courage, love and heroism that first responders and ordinary Americans displayed in the immediate aftermath of the September 11th attacks.

“The worst day of many peoples’ lives ensued, but at the same time many people were able to be their best,” Kiernan said. “That’s a very important message for kids today, especially in a world as divisive as the one we’re living in right now, to see that our American spirit and grit shines through, even in our darkest times.”

For Kiernan, the stakes here are personal. Her father John was a longtime city firefighter with Rescue Company 1. On that day 18 years ago, he was the first person she called. Like thousands of other firefighters, police, paramedics and good Samaritans, he sprang into action right away.

John Kiernan’s experiences serve as a throughline for the series. Functionally, the books frame the story of 9/11 through fictional conversations his grandchildren have with him, a decision his daughter made deliberately to sharpen the focus of the books. Topics like the loss of life, the years-long cleanup efforts and the persistent health issues of first responders are all filtered through the lens of simple trips and talks with their grandparents.

“I thought it was important for the kids to really drive the discussion,” Kiernan said. “The stories only unfold because they ask questions. They have no knowledge of that day, so the questions that I or any adult has would be very different from the questions they would have.”

Along with the dialogue and the recountings, the most poignant moments in the books are accompanied by illustrations. Artists Gabe and Haruka Ostley painted their work in watercolors in a conscious effort to make scenes like first responders digging through rubble and memorial services softer and more palatable to youth.

So far, reaction to the book series has been strong. For her part, Kiernan said she’s just glad she was able to pass along the lessons the nation learned on 9/11 to the next generation.

“We had a wonderful team pulling this together,” Kiernan said. “I just can’t believe how overwhelmingly positive the response has been. It’s really a blessing, and I feel so fortunate to be in a position where I could be helping people.”

Mike Adams
Mike Adams is the editor of the Great Neck Record and The Roslyn News.