A founding member of Chicago, keyboardist Robert Lamm got his start performing in a men’s and boys’ choir at Grace Episcopal Church in Brooklyn Heights. The New York City native eventually moved with his family to the city that would also be the name of his future group, shortly after starting to attend Brooklyn Tech. It was during his time performing with the choir that the presence of a practice piano led to Lamm’s introduction to the “’88s.”

“Before and after the actual rehearsal, there were other boys that did play piano, so we would sort of take turns and sit down at the piano until the choir master chased us out. I had never taken any piano lessons at all, so I just sort of sat down and mimicked ‘Heart and Soul’ and that kind of thing,” he recalled. “I played by ear for a very long time. I just sort of taught myself and I was later told by the parents of some of the other kids that did play that I had a nice touch. I don’t know what that meant at the time, but I did feel very comfortable playing the piano.”

Lamm recently shared some of his favorite ivory ticklers with Long Island Weekly.

“He had very unique comping and a very individual approach to interpreting melody. He was always in the pocket rhythmically. He’s on a lot of records where he was not the leader, but you could tell he was in that band. For me, he was very distinctive and even at my young age, I had one of the Trio albums—maybe the second one with Gary Peacock. I didn’t have a clue as to how to play jazz. Those albums hypnotized me.”

“I love Jimmy Smith. I have all his albums like everybody else. He played the organ the way a horn player plays his horn, so that’s what the draw was. And he had that very individual sound that all of us copied.”

“He just gets better as he ages and he sings too.”

“He’s young and has loads of potential. Interesting to see where he goes.” 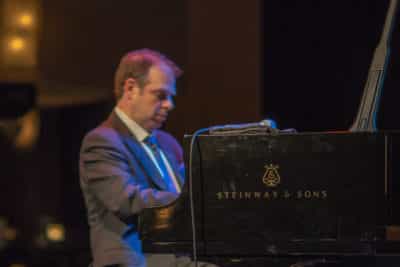 “Aaron has a great combination of groove, energy and technique.”