May 7
Amityville
The Skatalites @ Revolution Music Hall
140 Merrick Rd. 8 p.m. $20 adv. $25 DOS.
631-264-7712
www.revolutionli.com
Ground zero for ska and Jamaican music in general, The Skatalites have been wielding their brand of bouncy rocksteady since 1963. And while reedman Lester Sterling is the band’s last remaining founding member still in the group, this mostly-instrumental outfit has continued carrying on the legacy of this singular genre. And while times in the studio haven’t been as frequent, the Skatalites did manage to bang out Walk With Me, which was released in 2012. With The Pandemics, Soul Junkies and Radio Daze. (Also appearing on May 9 with Subatomic and Soundsystem at @ Brooklyn Bowl, 61 Wythe Ave. Brooklyn. 718-963-3369. www.brooklynbowl.com.)

May 7
NYC
Slash featuring Myles Kennedy & the Conspirators @ Terminal 5
610 W. 56th St. 8 p.m. $39.50 adv. $45 DOS. 212-582-6600
www.terminal5nyc.com
Slash’s greatest claim to fame may have come as one-half of the dual guitar attack that made up Guns N’Roses. But he’s also cobbled together an impressive post-G’N’R run that included loads of session work, and the band Velvet Revolver, which he conceived. And while he banged out a pair of albums with Slash’s Snakepit along the way, 2010’s self-titled Slash was his first true solo outing. Working off a slew of songs he’d stockpiled, the top-hat-wearing guitarist reached out to a wide-ranging span of musical talents, including Ian Astbury, Fergie, Kid Rock, Iggy Pop, and Ozzy Osborne. Fast forward four years and the man born Saul Hudson is once again going with one vocalist, in this case, Alter Bridge’s Myles Kennedy. The result was Slash’s third solo outing, last year’s World on Fire. With Unlocking the Truth.

May 8
Westbury
The Whispers & Stephanie Mills @ NYCB Theatre @ Westbury
960 Brush Hollow Rd., 8 p.m. $49.50, $39.50. 877-598-8497
www.livenation.com
One of the sturdiest R&B vocal groups, the Los Angeles-based Whispers have been plying their trade since being founded in 1964. While they’ve had occasional forays onto the pop charts (“Rock Steady,” “And the Beat Goes On”), the now-quartet have made quite a mark on the R&B charts thanks to an impressive total of 34 Top 40 hits. Stephanie Mills more than holds up her end of the bill, having won the Apollo Theater Amateur Night a record six times early in her career before breaking big playing lead character Dorothy in the initial Broadway run of The Wiz. The hits followed and included Grammy winner “Never Knew Love Like This Before,” “Put Your Body In It,” “Two Hearts,” “I Have Learned to Respect the Power of Love” and hit covers of Prince (“How Come You Don’t Call Me Anymore”) and Gladys Knight & The Pips (“If I Were Your Woman”).

May 8
Bay Shore
NRBQ @ the YMCA Boulton Center for the Performing Arts
37 W. Main St. 8 p.m. $40, $35. 631-969-1101
www.boultoncenter.org
One of the most beloved cult bands, the NRBQ (New Rhythm & Blues Quartet–previously quintet), has been knocking around in one iteration or another since 1967, save for a few multi-year hiatuses. Having done everything from being the house band for The Simpsons from seasons 10 through 12 to enlisting late wrestling personality Captain Lou Albano to be the band’s manager during the ‘80s, the ‘Q has built up quite the canon. Having had their songs covered by a number of musical fans including Bonnie Raitt, Los Lobos and Dave Edmunds, NRBQ soldiers on with keyboardist Terry Adams, who resurrected the group in 2011 after a four-year break, and even had the group return to the studio for last year’s Brass Tacks.

May 8
Brooklyn
Gilberto Santa Rosa & Jerry Rivera @ Kings Theatre
1027 Flatbush Ave., 8 p.m. $125, $75, $50, $45. 929-210-8419
www.kingstheatre.com
With temperatures heating up, so is the slate of Latin music concerts coming through town. This double-bill of heavyweight salseros features Gilberto Santa Rosa and Jerry Rivera, two of the genre’s premium talents. Santa Rosa, a.k.a. “El Caballero de Salsa,” emerged from the studio with last year’s Necesito Un Bolero and boasts the distinction of holding the record for most number-one albums on the Billboard Tropical Albums chart since 2010. With his matinee idol looks, Rivera is no slouch either. While his last studio recording was 2011’s El Amor Existe, the native of Humacao, PR has kept up a busy international touring schedule (Spain, France, Japan, Sweden, Mexico, Central and South America), stopping long enough in 2011 to be one of the four judges of Idol Puerto Rico (the Puerto Rican version of American Idol).

May 9
Brooklyn
The O’Jays @ Kings Theatre
1027 Flatbush Ave., 8 p.m. $125, $99, $89, $69. 929-210-8419
www.kingstheatre.com
Inducted into the Rock & Roll Hall of Fame in 2005, some would say The O’Jays were overdue for entrance into the hall. Founded as a quintet in 1958, the group found its greatest success when it became a trio and hooked up with the production duo of Kenneth Gamble and Leon Huff when the group wound up signed to Philadelphia International in the early ‘70s. Seven Top 20 pop hits dropped from 1972 to 1978 and included classics like “Love Train,” “I Love Music,” “Back Stabbers” and “For the Love of Money.” Original members Eddie Levert and Walter Williams continue to keep the O’Jays flame burning along with Eric Grant, who joined the group in the early ‘90s.

May 9
Bay Shore
Hal Ketchum @ the YMCA Boulton Center for the Performing Arts
37 W. Main St. 8 p.m. $45, $40. 631-969-1101
www.boultoncenter.org
There was a time during the ‘90s when Hal Ketchum was a big deal in Nashville while a member of the Curb Records artist stable. The Greenwich, NY native had 12 Top 40 singles from 1991 to 1998 that included Top 5 smashes “Small Town Saturday Night,” “Past the Point of Rescue,” “Sure Love” and “Hearts Are Gonna Roll” along with a 1998 hit cover of Todd Rundgren’s “I Saw the Light.” Recent years have found Ketchum leaving Music Row for Texas, grappling with multiple sclerosis and bouncing back with the recently released I’m the Troubadour.

May 9
Huntington
Southside Johnny & the Asbury Jukes @ The Paramount
370 New York Ave. 7 p.m. $49.50, $39.50, $30, $25, $20. 631-673-7300
www.theparamountny.com
As much a fixture of the Jersey bar-band scene as longtime buddy Bruce Springsteen, Southside Johnny is one of those artists who always seems to be locally playing one place or another throughout the calendar year. This of course makes Southside Johnny and his Asbury Jukes one of the music industry’s tightest live acts highlighted by the fact that this crew has a deep and extensive canon to pull from.

May 10
NYC
Joan Osborne & Friends Mother’s Day Benefit @ The City Winery
155 Varick St., 8 p.m. $60, $55, $40. 212-608-0555
www.citywinery.com
Even though 2012’s Bring It On Home was Joan Osborne’s last studio outing, she’s most recently kept busy as a member of Trigger Hippy alongside Black Crowes drummer Steve Gorman and roots-rock singer-songwriter Jackie Greene. Osborne finally returned to the studio and as such, the curvy southern siren is out in support of last year’s Love and Hate, a collection of songs inspired by the vagaries of amor. For this show, proceeds will benefit the Polaris Project and the Sparrows Nest Charity. For more information, please visit www.polarisproject.org and www.sparrowsnestcharity.org. With special guest Chely Wright.

May 11
Brooklyn
Passion Pit @ Kings Theatre
1027 Flatbush Ave., 9 p.m. $45, $39.50. 929-210-8419
www.kingstheatre.com
What started out as one-man gang Michael Angelakos has evolved into a quintet whose sound has been dubbed indietronica. And while the band is three albums in, with the latest being the recently released Kindred, the band might best be known for “Take a Walk,” a single from 2012’s Gossamer that was also extensively used in a Taco Bell ad campaign. With HOLYCHILD.

May 13
NYC
Vetiver @ Bowery Ballroom
6 Delancey St., 9 p.m. $20 adv. $22 DOS. 866-858-0008
www.boweryballroom.com
Emerging from the same freak folk movement as Devendra Banhart (who was briefly a member of Vetiver), Joanna Newsom and Vashti Bunyan, Vetiver has been driven by creative mastermind Andy Cabic. Getting its start in San Francisco, the quintet has compiled a healthy canon that includes 2008’s all-covers Thing Of the Past (that includes an odd assortment of artists interpreted here including Hawkwind, Garland Jeffreys, Bobby Charles and Townes Van Zandt) and the band’s latest, the recently released Complete Strangers.

May 9
Brooklyn
Jane’s Addiction @ Brooklyn Bowl
61 Wythe Ave. 9 p.m. $125. 718-963-3369
www.brooklynbowl.com
Not unlike the fictional Spinal Tap and that band’s difficulty in keeping the drum chair filled, Jane’s Addiction has had a similar problem with bass players ever since founding member Eric Avery first quit the band back in 1991. And while he briefly returned to the fold in 2008 and toured through 2010, over the years his spot has been held by a number of substitutes including Flea, Duff McKagan, Porno for Pyros’ Martyn LeNoble and TV On the Radio’s Dave Sitek. With Chris Chaney (Alanis Morisette/Methods of Mayhem) forming the rhythm section with Stephen Perkins, Jane’s isn’t out on the road behind a new studio effort, (the last one was 2011’s The Great Escape Artist, only the band’s fourth studio album.) Instead, it’s a ride on the nostalgia train as JA will be playing its classic 1988 debut Nothing’s Shocking in its entirety. With A Place to Bury Strangers. (Also appearing on May 18 at The Paramount, 370 New York Ave. Huntington. 631-673-7300. www.theparamountny.com.) 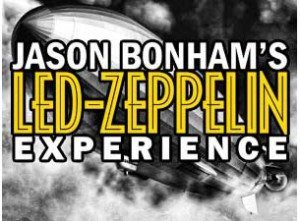 May 13 & 14
Westbury
Jason Bonham’s Led Zeppelin Experience @ NYCB Theatre @ Westbury
960 Brush Hollow Rd., 8 p.m. $69.50, $49.50. 877-598-8497
www.livenation.com
Despite having to carry the weighty legacy of his father, Jason Bonham has soldiered on as a member of various groups (Virginia Wolf, Airrace, Bonham, UFO, Foreigner) always returning to the safety of the Led Zeppelin mothership. Having played with Zep’s surviving members along with individual projects with Jimmy Page (Outrider), Bonham has also put in time dipping into that particular pool with Heart’s Wilson sisters and even Sammy Hagar’s The Circle. Here’s another chance to get the Led out with Bonham over in Westbury.