Best known as a member of The Staples Singers, Mavis Staples has nonetheless cultivated quite the solo career thanks to a number of famous fans who’ve served as producers including Prince, Curtis Mayfield and Ry Cooder. For the past couple of albums, Staples has served as a muse for Wilco’s Tweedy, with the end results being 2010’s You Are Not Alone and last year’s killer sequel One True Vine. With Amy Helm.

Taking its name from the French Quarter-based Preservation Hall venue that this musical collective called its home base, the revolving door of musicians commemorated five decades of playing traditional New Orleans music with the 2012 box set, 50th Anniversary Collection. But rather than resting on its collective laurels, the Preservation Hall Jazz Band released last year’s That’s It!, the group’s first recording of all original material that featured appearances by the Del McCoury Band plus production and songwriting contributions from My Morning Jacket’s Jim James, Semisonic’s Dan Wilson and the legendary Paul Williams.

Power pop is one of the most cherished of musical sub-genres thanks to the healthy dollops of righteous guitar riffs, harmonies and hooks a-go-go with roots in the British Invasion greatness of The Who, Kinks, Move and of course, The Beatles and were furthered by acolytes Cheap Trick, Big Star, Badfinger, The Raspberries and the Flamin’ Groovies. The Brooklyn Power Pop Festival honors all this greatness over two nights: Friday finds Oklahoma-born pop maestro Dwight Twilley sharing a bill with recently resurrected Illinois peers Pezband while Saturday pairs Midwest legends Shoes (whose 1977 outing Black Vinyl Shoes is a power-pop staple) with California’s equally fabled Paul Collins Beat.

Music fans of a certain age will remember Clint Holmes for his 1973 number 2 Billboard hit “Playground In My Mind” along with hearing his golden pipes singing the jingle, “Weekends were made for Michelob” as part of Anheuser-Busch’s 1970s ad campaign. Nowadays, Vegas is where you’ll find him hanging his shingle but for this rare trip east, he’ll be performing a show called “This Thing Called Love,” which imagines a meeting between Cole Porter and Paul Simon at a bar. As such, attendees can expect to hear the UK native tucking into interpretations of “Night & Day,” The 59th Street Song (Feeling Groovy),” “Have a Good Time,” “It’s Alright With Me” and “You Can Call Me Al.” 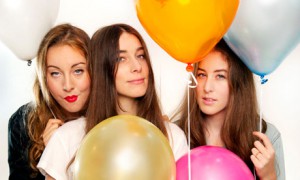 With their surname doubling as the group name, sisters Danielle, Alana and Este somehow managed to mix the disparate influence of Fleetwood Mac, Destiny’s Child and ’80s synth-pop into a mucho catchy amalgamation of pop manna that yielded last year’s Days Are Gone and the earworms “The Wire” and “Don’t Save Me.”

One of the more underrated purveyors of blue-eyed soul, Boz Scaggs got his start singing in elementary schoolmate Steve Miller’s band, both as a teen and adult, before striking out on his own in the ’70s. The mid- to late-’70s saw Scaggs blowing up commercially thanks to the success of Silk Degrees and hits like “Lowdown” and “Lido Shuffle.” In recent years, he’s taken to touring in the ad-hoc Dukes of September, an offshoot of the early ’90s New York Rock and Soul Revue, which reunited Scaggs with fellow soulful white boys Michael McDonald and Donald Fagen. Last year, the Ohio native went back to his R&B roots with the release of Memphis, an homage to the city, Al Green and storied producer Willie Mitchell.

Apparently its Lady Gaga’s world and the rest of us only live in it. Last year saw Gaga releasing her third studio album Artpop, starring in director Robert Rodriguez’s Machete Kills and partaking in Lady Gaga and The Muppets’ Holiday Spectacular, her second Thanksgiving special. At the quarter pole of 2014, the New York City native is continuing her breakneck pace with this tour, a role in another Rodriguez flick (the forthcoming Sin City: A Dame to Die For) and the much-anticipated Tony Bennett collaboration Cheek to Cheek, pushed back and set to drop at the end of the year. Expect 2014 to continue being the Year of Stefani Germanotta.