July 15
Wantagh
Daryl Hall & John Oates @ Nikon @ Jones Beach Theater
1000 Ocean Pkwy, 6 p.m. $203.25, $108.50, $54.75, $41.75, $35.25. 800-745-3000
www.jonesbeach.com
Daryl Hall and John Oates are often construed as little more than ‘80s soft-rock cheese-wizards, but in fact, nothing could be further from the truth. Forget their massive sales and string of chart-topping hits; the duo is responsible for some of the best-written, best-sounding pop and soul music of the ‘70s and ‘80s. “Sara Smile,” “Out of Touch” or “Rich Girl”—these are the sounds of blue-eyed soul that not only reflects the influence of cities like Philly, New York, Detroit and Memphis, but how this duo has managed to achieve their impressive longevity.

July 15
NYC
Sam Bush @ The City Winery
155 Varick St., 8 p.m. $55, $45, $40. 212-608-0555
www.citywinery.com
The heir apparent to Bill Monroe, Sam Bush is acknowledged as one of the greatest living mandolin players (and a pretty stellar fiddle player on top of that). A cornerstone of the newgrass movement, Bush is also a much in-demand session musician who has strummed alongside the likes of Garth Brooks, Lyle Lovett, Bela Fleck & the Flecktones, Emmylou Harris, Ralph Stanley, Gillian Welch, Doc Watson and Dolly Parton. All of this on top of having a fairly vibrant solo career. Bush’s last outing may have been 2009’s Circles Around Me, but baseball fans are advised to check out 2004’s King of My World and the closing track “Wizard of Oz,” which lifelong St. Louis Cardinals fan Bush penned in honor of Hall of Fame shortstop Ozzie Smith. With Danny Burns.

July 15
Brooklyn
Hayes Carll @ Rough Trade NYC
64 N. 9th St., 9 p.m. $20. 718-388-4111
www.roughtradenyc.com
He may originally hail from the Houston suburb of The Woodlands, but singer-songwriter Hayes Carll is cut from the same cloth as that legion of legendary Austin singer-songwriters that include the late Townes Van Zandt, Butch Hancock and Jimmie Dale Gilmour. Even though his last record was 2011’s KMAG YOYO (which is a military acronym for “Kiss My Ass Guys, You’re On Your Own”), expect Carll to be road-testing new material from his forthcoming project with Joe Henry when he hits Brooklyn with this solo show. Get there early for opening act Anders Parker (Varnaline, Gob Iron).

July 15 & 16
Flushing
Foo Fighters @ Citi Field
126 St. & Roosevelt Avenue, 7 p.m. $75, $58.50, $45. 800-745-3000
www.livenation.com
Of the post-grunge class of acts that came of age following the great early ‘90s Pacific Northwest invasion, Foo Fighters have aged the most gracefully. Unlike peers like unlike peers Matchbox Twenty (eternally plagued by Rob Thomas’ unerring wussiness) or Bush (who just plain suck), Foo and its everyman founder Dave Grohl have shown a penchant for well-crafted pop in the often conservative and limiting hard rock context. Always looking to change things up, Foo’s latest, last year’s Sonic Highways, found Grohl and his crew recording in eight different cities around the United States, conducting interviews with artists, engineers and producers about said community’s music history and using that as inspiration to write and record a song in said city. It resulted in both a stellar recording and accompanying multi-part kick-ass HBO documentary series. It was further affirmation that Grohl’s pop instincts remain airtight. Get there early for UK duo Royal Blood, who come off sounding like a British counterpart to The White Stripes.

July 16
NYC
Salt-N-Pepa @ B.B. King Blues Club and Grill
237 West 42nd St. 8 p.m. $45 adv. $50 DOS. 212-997-4144
www.bbkingblues.com
As one of hip-hop’s first all-female acts, Salt-N-Pepa has enjoyed a late career resurgence that includes a much-aired Geico commercial where they reprise their 1986 hit “Push It.” Ever since getting back together for VH-1’s Hip Hop Honors in 2005 the duo (along with DJ Spinderella) have starred in a reality series (The Salt-N-Pepa Show) and been fixtures on the road. While 1997’s Brand New was the threesome’s last foray into the studio, they’ll have plenty to pull out of their back catalog that will include “Whatta Man,” “Let’s Talk About Sex,” “None of Your Business” and “Shoop.” With DJ Prince Hakim. 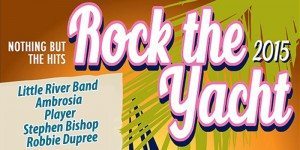 July 17
Westbury
Rock the Yacht 2015 @ NYCB Theatre @ Westbury
960 Brush Hollow Rd., 8 p.m. $63. 877-598-8497
www.livenation.com
What started as a satirical online video series based on the lives of late ‘70s/early ‘80s soft rock stars (Yacht Rock), wound up becoming a subgenre unto itself. It’s become enough of a movement that Jimmy Fallon used to pay homage to it via a quasi-regular segment on his show. For the purposes of this tour, you wind up with is Little River Band (“Lonesome Loser,” “Help Is On the Way”), Player (“Baby Come Back,” “This Time I’m In It For Love”), Ambrosia (“How Much I Feel,” “Biggest Part of Me”), Robbie Dupree (“Steal Away,” “Hot Rod Hearts”) and Stephen Bishop (“On and On,” “Save It For a Rainy Day”).

July 16 & 17
NYC
Kelly Clarkson @ Radio City Music Hall
1260 Sixth Ave., 8 p.m. $169.50, $109.50, $84.50, $59.50. 866-858-0008
www.radiocity.com
As the winner of the inaugural season of American Idol, Kelly Clarkson is arguably one of the most successful participants to emerge from this televised talent competition. And while she had the misfortune of starring alongside fellow Idol alum Justin Guarini in the 2003 cinematic flop From Justin to Kelly, her successes have included her 2003 hit “A Moment Like This” be that year’s best-selling single, having three of her seven albums be American chart toppers and racking up numerous Grammy, American Music, MTV Video Music and Billboard Music Awards. While the recently released Piece By Piece is Clarkson’s last contractually obligated pop album, the Texas native has gone on record as saying she’s working on a country music recording. One has to wonder if having Reba McEntire as a longtime friend and current mother-in-law might have had some influence on this creative decision.

July 17
Wantagh
Frozen’s Idina Menzel @ Nikon @ Jones Beach Theater
1000 Ocean Pkwy, 6 p.m. $118.15, $90.90, $47.35, $27. 800-745-3000
www.jonesbeach.com
Call it a homecoming as this Syosset native will be playing just up the road from her hometown. Having used Broadway as a springboard thanks to being part of the original cast of Rent back in 1995, Menzel not only went on to have John Travolta mangle her name at the 86th Academy Awards, but got positive reviews for recurring roles on Glee, numerous returns to the Great White Way (Wicked, If/Then) and of course, her role as Elsa in the 2013 Disney animated feature Frozen. Expect lots of screaming when Menzel launches into “Let It Go” at the beach.

July 17
Bay Shore
Steve Forbert Trio @ the YMCA Boulton Center for the Performing Arts
37 W. Main St. 8 p.m. $35, $30. 631-969-1101
www.boultoncenter.org
Once saddled with the unfortunate label of being the “next Dylan,” Steve Forbert has comfortably settled into a lower-profile role while dishing out a blend of heartland rock and sturdy folk. His swing through our area finds him hitting Long Island for what’s been an annual visit and playing the intimate confines of the YMCA Boulton Center for the Performing Arts. Here, he’ll be serving up material from a deep canon that was kicked off by the recently-reissued 1979 sophomore bow Jackrabbit Slim. Expect to hear Forbert’s breakout hit “Romeo’s Tune” along with a cover or two of fellow Mississippian Jimmie Rodgers.

July 18
Prospect Park
Rhiannon Giddens @ Celebrate Brooklyn @ the Prospect Park Bandshell
Prospect Park W. @ Ninth St., 7:30 p.m. Free. 800-745-3000
www.bricartsmedia.org
The past two years have been quite the whirlwind for Rhiannon Giddens. Not only did she catch the eye of uber-producer T-Bone Burnett at the 2013 Another Day, Another Time concert held at Town Hall that was inspired by the Coen Brothers film Inside Llewyn Davis, but he pursued Giddens to participate in his 2014 Lost On the River: The New Basement Tapes project and also helmed her solo debut, Tomorrow Is My Turn. Despite being released back in February, Tomorrow Is My Turn promises to be on plenty of Best of 2015 lists. And in keeping with her creative restlessness, Giddens responded to the horrific massacre in South Carolina by recording “Cry No More,” a one-take, live video written in direct response to the shooting. With Joe Henry.

July 18
NYC
U2 @ Madison Square Garden
4 Pennsylvania Plaza. 8 p.m. $280, $100, $70, $35. 212-707-3131
www.thegarden.com
As behemoths on the global pop culture stage, U2’s standing in the music world has been equally omnipotent despite the five year lag between 2009’s No Line On the Horizon and last year’s Songs of Innocence. And while the former also wound up coming on the heels of a five-year hiatus due in part to the group scotching recording sessions with producer Rick Rubin and returing to collaborative comfort blankets Steve Lillywhite, Brian Eno, and Daniel Lanois, the group’s latest outing found the Irish quartet tapping Danger Mouse, Paul Epworth, Ryan Tedder, Declan Gaffney and old friend Flood to produce. While the initial release was widely criticized due to the group’s decision to have it added to users’ iTunes accounts without their permission, Bono has described it as “the most personal album we’ve written.” (Also appearing on July 19, 22 & 23; 26 & 27, 30 & 31.) 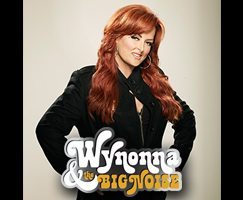 July 19
Westhampton Beach
Wynonna & The Big Noise @ Westhampton Beach Performing Arts Center
76 Main St., 8 p.m. $175, $150, $95. 631- 288-1500
www.whbpac.org
As one of the most successful country music duos in history, (The Judds, alongside mom Naomi), Wynonna Judd has enjoyed a wildly successful second act as a solo artist. Since sailing off on her own in 1992 by way of her self-titled debut album, Judd has released seven albums, had five chart topping singles, competed on Dancing With the Stars and has been involved with a number of charities including Habitat for Humanity, MusicCares, the American Red Cross and Vanderbilt Children’s Hospital.