Cheap Trick At The Paramount 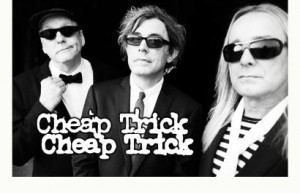 For nearly four decades, Cheap Trick has been engaged in non-stop touring and creating music that’s influenced a wide range of artists from Guns ‘N Roses and Nirvana to Smashing Pumkins, Weezer and Husker Du. For whatever reason, unquestionable induction into the Rock and Roll Hall of Fame has continued to elude the Illinois quartet despite them achieving eligibility in 2002.
And while next year’s slate of potential nominees includes Nine Inch Nails, Green Day, Pavement, Lenny Kravitz and Barenaked Ladies,, Rick Nielsen and company are getting snubbed for yet another year. In the meantime, the band has continued to be a rock-solid live act that generates more vigor and panache than groups half its age.