Champions Of Charity ‘Doin’ It’ Well

The opportunity to do good is nothing new for LL Cool J. He and his wife Simone I. Smith were at Hirschleifer’s at the Americana Manhasset recently at the Champions for Charity event supporting Jump & Ball, Cool J’s recreational tournament for youths.

LL Cool J is an accomplished rapper and talented actor most well known for his role on NCIS: Los Angeles, which plays on CBS on Sundays and the host of the Spike TV’s Lip Sync Battle. He is a two-time Grammy winner, nominated nine times and has hosted the program five times. Author of several books, he has overcome many obstacles including child abuse and has come out on top.

In an excerpt from his book, I Make My Own Rules, Cool J says, “Not every child who’s abused has to be a negative statistic. I write this book for anyone who thinks they can make it, to show them they can.”

Smith is the creative mastermind behind the jewelry line of Simone I. Smith sold at major retailers. A strong believer in her faith, Smith has overcome a painful battle with cancer and has been a pillar of strength for those facing the disease. Individually, both are amazing, but together they are a powerhouse. Married for 22 years, the couple has known each other for close to 30 years. Now, the couple resides on both coasts, part of the time in Manhasset and in California when filming on the west coast. They have raised their four children through the public school system. The height differences are obvious as the petite Smith stands next to the towering J, but the story comes from the heart.

The couple met for the first time “on Easter Sunday outside my aunt’s house in St. Albans,” said Smith.

A lot has happened in the couple’s life, too much to be listed here, but the ties to the neighborhood remain strong and LL Cool J was inspired to put together a program for the at risk kids of St. Albans.

“First I put together a camp upstate, but that had issues with transportation to and from the city.” said LL Cool J. “So now we put together a camp for kids every Saturday and Sunday during the month of August, which includes basketball, dance, double-dutch, chess and more.” The camp runs all day at Daniel O’Connell Park in St. Albans, Queens. 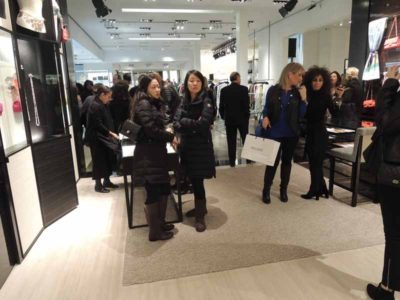 When asked how he manages to do it all, LL Cool J replied “my grandmother said “idle hands are the devil’s workshop.” He credits his success with having good people to help him.

Champions of Charity have raised more than $1 million for about 130 charities. The four day event ran from Dec. 1 to 4. Multiple events are hosted by each of the 70 stores participating in the event. For more information on the program, visit www.championsforcharity.org.

“Now in its 21st year, Champions for Charity is our hallmark holiday event that brings our community together,” said Deirdre Costa Major, president, Castagna Realty Retail Group. “We strive to offer more in our shopping experience. Giving back is a significant way of making a difference.”