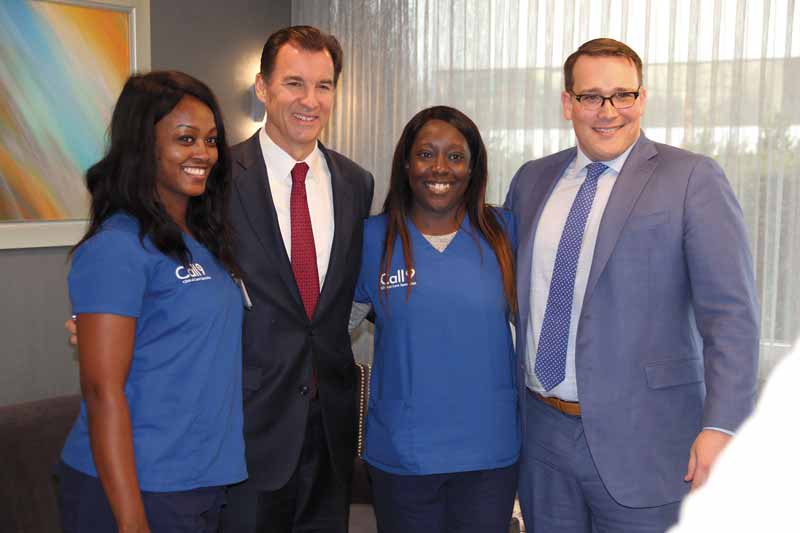 Rep. Tom Suozzi visited Central Island Healthcare, a nursing home facility in Plainview, to observe how Call9, an emergency care company, has been improving the lives of Central Island residents. Michael Ostreicher, executive director of Central Island, and Dr. Timothy Peck, a Westbury native and Call9 co-founder and CEO, sat with Suozzi on Feb. 12 to answer his questions and then took him on a tour to meet with patients and nurses to see how the technology works in real time.

In July of 2015, the skilled nursing facility became the first in the nation to utilize Call9 technology. The brand’s emergency care is made possible through telemedicine—connecting a physician to the patient through technology and video technology.

“Our physicians are on-call 24/7, always available to see the patient, and then we have bedside hands here and that’s a really important part of what we do,” Peck explained. “We have these clinical care specialists who are trained to be able to handle emergencies. They go to the bedside whenever there’s any type of acute need for the patient, tap that app, connect to the physician and together they treat the patient.”

As Call9 clinical care specialist Rebecca Charles showed Suozzi, a moveable station houses all of the technology and equipment. An iPad on top will connect to a physician when needed and display medical information, and drawers under the desk space house all medical necessities. The station also includes a telemetry machine that live streams the patient’s vital signs onto the physician’s screen, live streaming of ultrasounds, bedside labs that result within two minutes, EKGs, a variety of blood and urine tests, medications and breathing treatments.

“The worst thing for a sick patient is to transfer back and forth to the hospital. Call9 reached out to me and I decided to take a chance on them. Two and a half years later, our patients have benefited tremendously and we’re very happy that we took a chance on them and to be their first client,” Ostreicher said. “We essentially have emergency room doctors available 24 hours a day to see our patients through [Call9’s] innovative technology, giving us the ability to treat patients bedside as opposed to sending them to the hospital.”

The immediate, in-house care Call9 provides, therefore eliminating the wait time of getting to a hospital and seeing a doctor, was the main idea behind Peck’s co-founding of Call9.
“The problem I got interested in, and kind of obsessed with, was it takes over an hour for you to call 911 and then see an emergency physician. I thought if I could be with people at the moment of emergency, maybe I could get to them earlier, and telemedicine seemed to be a good way to do that,” Peck said.

After making his way through med school at New York University and an emergency medicine residency at Harvard, Peck stayed as faculty at Harvard medical school and practiced in one of their hospitals. However, his interest in Silicon Valley and technology in the medical field prevailed and he went through Harvard’s business classes, “trying to create that skillset that I would need to lead and run a company like this.” Peck quit his Harvard career, teamed up with others willing to invest in Call9, moved out to Silicon Valley and finally headquartered the company in Brooklyn after having learned and raised enough money to get going.

As he observed that 19 percent of ambulance trips to emergency departments originate from nursing homes and rehab centers, Peck emailed nursing homes across the country with his business proposal. After Ostreicher took interest in Peck’s company, Peck made an all-out personal investment, spending three months sleeping on a provided cot in the facility’s conference room.

“I started seeing patients from the conference room so that if anything went wrong with the technology I would be here to treat the patients. In the meantime, I learned everything I could about the nursing home industry, about treating patients in nursing homes, how the medicine works, how the operations work, how the finances work, et cetera.”

With Call9 in place in Central Island, Peck said 80 percent of patients who utilize the telemedicine technology no longer require a hospital visit. The 20 percent who still need outside emergency care require surgery or ICU-level care that Central Island cannot provide in-house.

While already in eight nursing homes across the lower eight counties of New York, Peck said Call9 will be branching out this year at a rate of one nursing home per month.

“We’re going to, what they say, ‘hit the inflection point’ and start to scale into many, many more,” he said.

The Big Apple Circus, which announced several weeks ago that it was in dire financial condition and launched a $2 million fundraising campaign to...
Read more
Arts, Music & Entertainment

Derrick Baskin, who plays legendary singer Otis Williams in the brand new Broadway production Ain’t Too Proud: The Life and Times of The Temptations,...
Read more

We’re Halfway There: MLB At Midseason

All-Star Week is upon Major League Baseball and while all eyes are on the pros gathering in D.C., there’s plenty of work to do...
Read more
Sports

When it comes to football games, there’s always plenty of action on the field, but it’s the cheerleaders who keep the sidelines exciting. For...
Read more
News

Since the helicopter crash in Calabasas, CA on Sunday, Jan. 26, claimed the lives of the nine people, many have come forth with heart-wrenching...
Read more

Aphrodisiacs aren’t real. It doesn’t matter how many oysters you slurp down, how much chocolate you stuff in your face or how many hot...
Read more
Arts, Music & Entertainment

The Long Island bar scene has become so much more than a place to grab a drink and socialize after work. Between weeknight menu...
Read more

Get Ready For Thanksgiving With Donatella Arpaia

Heroes set to save Super Bowl Sunday Despite what the NFL or the television networks would have you believe, not everyone is a football fan....
Read more