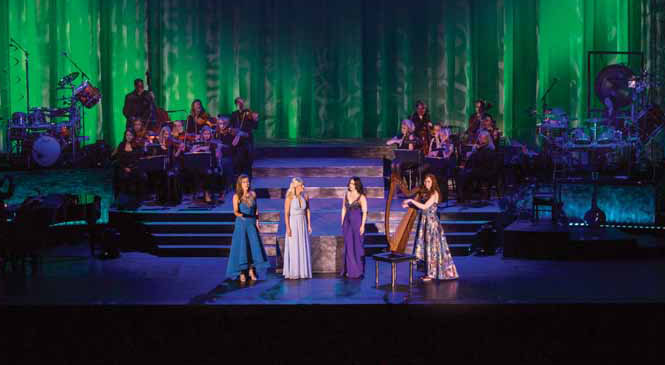 The Irish have always had a strong cultural base rooted in song and storytelling. And while the tradition is often steeped in images of cable-knit sweaters and caps, pennywhistle, reels and jigs, Celtic Woman has spent the past decade-plus serving as a musical crossroads where tradition gets a contemporary spin. It’s been that way ever since David Kavanagh, Sharon Browne and David Downes founded the group as a quintet, eventually having it evolve into a quartet. With Downes being the former musical director of Riverdance, it’s no surprise that Celtic Woman wound up becoming a glittery distillation of Irish culture, thanks to a Vegas-worthy stage show packed with plenty of costume changes, step dancing, bagpipes, a choir and plenty of orchestration. Since its inception, Celtic Woman has sold millions of albums globally and raised boatloads of cash for PBS during the network’s annual fundraising drives.

For vocalist Susan McFadden, who replaced founding member Lisa Kelly in 2012, the success of the group was rather eye-opening when she first joined. Up to that point, she’d been performing in revivals of Grease, Seven Brides for Seven Brothers and Legally Blonde on London’s West End. McFadden’s pathway to Celtic Woman came via friendships she had with former members Kelly and Chloë Agnew, both of whom she’d worked with on other musical theater productions.

“I didn’t know a whole lot about Celtic Woman. I’d been living in the UK and performing in musical theater in London in the West End. I knew Lisa Kelly from years ago. We’d worked together actually when I was a teenager. We’d done a show in Dublin many years ago and I knew Chloë Agnew from when she was a baby,” she recalled. ”I worked with her mother when I was 11 in a production of Annie where I played the title role and her mother played Miss Hannigan. From the two of them and social media, I was able to see and learn about Celtic Woman. I saw that they were part of this show that was seemingly massive in America and touring all over the country in these amazing venues. Then the call came out of the blue to join them. I thought that was weird, but Chloë and Lisa had actually put my name forward that they were looking for a new member.”

Not unlike prior tours, this year’s production has a theme, which in this case is the idea of home. For this go-round, it’s using Celtic Woman: Homecoming Live from Ireland, the group’s recently released live album, as a touchstone for the fans who come out to see the foursome. It’s all very exciting for McFadden, who has grown to love visiting different far-flung locales with the Celtic Woman crew, who have become a second family to her. The fact that she gets to travel with Anthony Byrne, who is her husband and also plays bagpipes in the production, is an added bonus.

“We have a lot of new songs in this show that we’ve never performed before because these are brand-new songs for Celtic Woman. They’re all very much based around the theme of homecoming and songs that I think we can really relate to because we do spend so much time away from home. They’re really nice songs to sing and perform because they’re all relating to coming back to our homeland and what we miss about it,” she said. “So these are some really special songs and of course, [people can expect] the fan favorites and some other kind of newer songs from our Voices of Angels and Destiny albums along with the latest one, Homecoming, as well. But there are a lot of brand-new songs that have never been performed by Celtic Woman, which we’re really excited about.”

While purists may bristle at the way Celtic Woman presents Irish culture to the masses, McFadden is rightly proud of the legacy she and the other ladies in this musical sorority have created. It gibes perfectly for the Dubliner, who grew up enthralled by powerful pop vocalists like Mariah Carey, Whitney Houston and Celine Dion, while also hailing from a family with deep Gaelic roots.

“We’re all very different and we are all from very different musical backgrounds, but we come together to create a very unique sound,” McFadden explained. “What I like about Celtic Woman is that we take really old, traditional Irish songs and bring them into the 21st Century and we make them appeal to all ages by putting a different twist on it. That’s how I like to think of it. Taking older songs and putting a modern twist on them and then taking newer songs and putting an Irish stamp on them.”

Celtic Woman will be appearing on Thursday, March 29, at the Tilles Center for the Performing Arts, 720 Northern Blvd., Greenvale. For more information, visit www.tillescenter.org or call 516-299-3100.