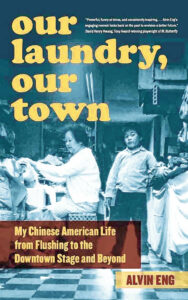 Isabel Allende once said that a memoir is invitation into another person’s privacy. It’s certainly the case with Our Laundry, Our Town: My Chinese American Life from Flushing to the Downtown Stage and Beyond, playwright Alvin Eng’s account of growing up as a second-generation Asian-American in 1970s New York City.
The youngest of five children, Eng was the result of an arranged marriage between his late parents, who he affectionately refers to as King Wah Eng and The Empress Mother. The Engs supported themselves running three Foo J. Chin Chinese Hand Laundries—one in Hoboken, one on East 86th Street in Manhattan and the third in Flushing, Queens. A major driver in the story is the relationship between the parental duo, who were living two separate, but parallel lives with the intersection coming at the hand laundry.

And while Flushing represents the second-largest Chinese community behind Brooklyn Chinatown and ahead of Manhattan’s Chinatown as of the 2010 census, that demographic representation was not always the norm. It was a reality Eng recounts about his 1970s childhood when that part of Queens was home to only a handful of Chinese families and where he found himself caught between American and Asian culture. Sports (the New York Knicks) and the arts (punk rock in particular) offered solace to Eng and his quest for an identity that is a strong narrative theme in this project that took nearly a decade to write in-between teaching gigs and performing myriad theatrical pieces. And while he was passionate about getting his story out, Eng was more interested in grappling with the challenge of providing a platform of broad appeal versus ending up with a vanity project.

“In some way, it takes a certain amount of chutzpah to write about yourself,” he explained. “I hate self-indulgence and I was super-tough about not wanting to do that. There’s also trying to find a flow where you have to figure out how to get so many years into one book. It’s a tough thing to lead in and out with along with finding a structure to hang it on. How do you make it relate to other people in all different worlds? There are all these different streams and themes but I feel like at the end of the day, it’s a New York City book.”

The gritty underbelly of the Big Apple is the setting for those early years, where Eng and his friends would hop on the Number 7 line to Manhattan, where they would invariably end up at punk music mecca CBGB’s. It was this unlikely setting that would prove to be an important component in helping the future playwright seek his identity.
“The arts are where all outsiders go,” he said. “I was very lucky to come of age when punk was evolving. Anyone who feels like an outsider didn’t have to worry about hiding what made them different. Instead, you were encouraged to shout it from the rooftops. Finding that was essential and what changed my life was when David Johansen let me interview him when I was a high school kid. It changed my life. Plus I was lucky that my parents were tolerant because as long as I can remember, there was always a band in the garage and music was always around.”

Throughout the book, Eng weaves in a lot of larger historical facts that wound up shaping the Chinese American zeitgeist and the family dynamics that come with it. There are references to 1882’s Chinese Exclusion Act, which not only barred Chinese from immigrating to the United States, but it also forbade legal Chinese residents from becoming citizens, marrying other citizens or bringing their wives over (“Maybe the first and last American law that made it legal to discriminate against one race of people that prevented them from becoming citizens.”) And there is also mention of China’s Opium Wars with Great Britain (“Growing up we worshiped the heroin chic junkies but we didn’t want to become an addict, but rather wanted to act like Keith [Richards] and Iggy [Pop]. But then I eventually realized that my grandfather died of an opium overdose and that opium changed the Chinese forever.”)

It’s this kind of strong stuff that informs readers as they follow Eng’s journey into theater, where he meets his wife Wendy and earns a Master of Fine Arts degree from the Graduate Musical Theatre Writing Program at New York University’s Tisch School of the Arts. Eng also wound up being a two-time Fulbright Specialist appointee with a residence at City University of Hong Kong. It was here where the American-born Eng was invited by the U.S. Consulate, Guangzhou, to conduct theater workshops and perform his memoir monologue, The Last Emperor of Flushing, in his family’s ancestral Guangdong Province. It’s all heady stuff that Eng was finally able to tie together after a decade-plus of trying.

“Writing this book was very therapeutic,” Eng said. “Growing up in New York, where it’s so diverse, sometimes you feel like there’s no place for you. On some days, you feel like you’re ‘none of the above.’ Instead, you’re ‘all of the above.’ Because in New York, it’s hard to be everywhere and to do everything. It’s hard to be grounded sometimes when all this stuff is swirling around you. I think it’s really about being able to put it down on paper and become more whole, which is what I was able to don once I achieved balancing act of juggling so many worlds and so many cultures.”

Alvin Eng will be appearing on Wednesday, June 8 to do a book signing and meet and greet at Yu & Me Books, 44 Mulberry St. in Manhattan’s Chinatown, Visit www.yuandmebooks.com or call 646-559-1165 for more information. Visit www.alvineng.com to learn more about Alvin Eng.