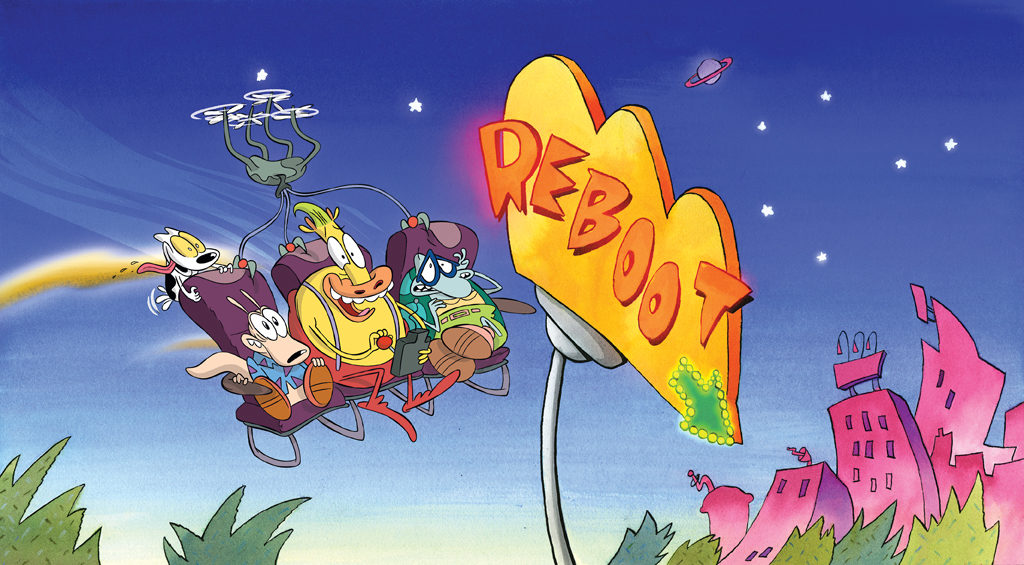 According to the Internet Movie Database, Carlos Alazraqui has 317 acting credits, the majority of them featuring him as a prominent voice-over artist. But for the former stand-up comic, it all began with him providing the voice and personality of the title character of Rocko’s Modern Life. The Nickelodeon animated sitcom originally ran from 1993 to 1996 and centered on the exploits of an anthropomorphic Australian-immigrant wallaby named Rocko as well as his friends, all who lived in the fictional town of O-Town.

Throughout the series’ 52 episodes, the extensive use of satirical social commentary, clever innuendo and double entendres appealed to both children and adults, with the latter consisting of a large college-age fan base. Twenty-two years after it ceased airing original episodes in 1996, the show is set to return via Rocko’s Modern Life: Static Cling, a one-hour TV special featuring all the original voice talents and creator Joe Murray serving as the executive producer. The return of the series is something Alazraqui immediately embraced when he ran into Murray, friend and former castmate Doug Lawrence and series staff writer Martin Olson at HOME Restaurant in the Silverlake neighborhood of Los Angeles back in August 2016.

“I see these guys walk in and I asked, ‘What’s going on here? Is something maybe going on with Rocko?’,” Alazraqui recalled. “I was told they were writing a story for Rocko and maybe it was going to be a movie. It was probably in August 2016. Along comes November and we record it. I remember the genesis of it all being August 2016, with those guys sitting at a table and saying we were doing it. I was so happy.”

In returning to this breakout role and being able to work with his friends again, the Yonkers native was quick to point out that no one missed a beat. And the joy of being able to inhabit this character 20 years later returned just as quickly, particularly when everyone was working together in the recording studio again.

“Jill Talley and Linda [Wallem] came in to do separate sessions, as well as Steve Little. But Tom [Kenny], Doug, Charlie [Adler] and myself were there and it was like The Who getting back together after 25 years. We prank and gag. Plus Tom, Doug and I were also on Camp Lazlo, which was a Joe Murray show,” he said. “Having known each other, the chemistry was really fun. Even after 20-something years, we were all thrilled to be in the room together. We watched each other work. I really paid attention to it and really revering it. I was in the room with a bunch of legends and we’re good and we still got it. We were on point. We knew what we were doing and it’s all great.”

During Rocko’s original four-season run, the show’s writers were constantly pushing the boundaries with network censors. Among the coups was featuring story lines that included Rocko’s brief time as a telephone operator at an office with instructions on the wall reminded all employees to “Be Hot, Be Naughty, and Be Courteous” while Rocko dispassionately repeated “Oh baby” into the receiver. Or when Kenny’s Heffer Wolfe, Rocko’s best friend and a castrated steer, has an amorous encounter with a milking machine, with only his reactions getting shown on-screen. Ask Alazraqui why he thinks Rocko was able to get away with so much, and he has a few theories.

“I think we owe [John] Kricfalusi a lot of thanks for putting Ren & Stimpy on before us and we would literally follow it in the line-up. So that opened doors. It was very subversive. You could get the subversiveness in this really sweet character,” he said. “In the movie, there are some really wonderful reveals and the way our characters react to it is so wonderful. They’re just wide-eyed still and I think that innocence allows us to get away with that subversiveness for sure. We feel safer because we don’t feel like it’s quite real.”

The son of Argentinian parents, Alazraqui moved to the Bay Area community of Concord when he was a kid. When he wasn’t enjoying cartoon characters like Commander McBragg, Go Go Gophers, Kimba the White Lion and the Inspector and Sgt. Deux-Deux of Pink Panther fame, Alazraqui was soaking up the voices of his ethnically diverse blue-collar neighborhood.

“My parents were both from Argentina. Other accents included people that would come over from Peru,” he recalled. “We had a lot of Russian friends and then Kevin, who I met in kindergarten, lived in the neighboring sub-tract. Both Kevin’s parents were from Glasgow, Scotland. And Uncle Danny was there and he’d call me ‘Kar-los.’ So I had this tapestry of dialects that I could tap into and got into it, which made me pay attention to television. Particularly characters like Grandpa Al Lewis on The Munsters. I just started paying attention to dialects, characters and accents because of my background and who my best friend was.”

In getting cast as the lead in Rocko’s Modern Life, Alazraqui was able to transition from performing stand-up comedy to becoming a much in-demand voiceover artist.

Being able to return to square one as part of the Static Cling special has not only given the Los Angeles resident great joy, but a desire to have it live up to the show’s roots.

“Characters that I’ve played since [Rocko] have been a bit more kid-oriented. But Rocko is just this sweet little eye of the hurricane,” he said. “My favorite part [of doing this] is playing someone that’s like Seinfeld—he’s subtle and doesn’t have all the laugh lines, but he’s the glue that holds it all together. Whereas the most challenging part is to try to get it true. I think the special Static Cling is more towards the first and second season of Rocko before the censors [came in]. The challenge was to make that happen again.”