Curling may not be the first thing that comes to mind when thinking about sports, but the Long Island Curling Club thinks very highly of the upstart sport. Formed in 2008, the club is dedicated to providing Long Island residents an enjoyable curling experience which, according to Dave Tumminello, the club’s president, is meant to contribute to the sport’s growth.

“We try to make more people aware of the sport,” Tumminello said. “People tend to think curling is cool or interesting or odd, but they don’t know that it’s in their own backyard.”

Any one of Tumminello’s adjectives could conceivably describe the objective in a curling match. Each team has a skip, whose job it is to call all of the shots. Upon receiving the skip’s instruction, a thrower will then release a “stone” down the ice. Two sweepers aid the stone’s trajectory by sweeping the ice, and typically more sweeping equals a greater distance traveled. Each team’s points are tallied based on the number of stones that remain in the large circle, or house, at the conclusion of a round, or end. A highly strategic game, curling does not enjoy popularity in the United States on the order of football or baseball. But it is growing, Tumminello points out, even though many may still see it as a niche sport. 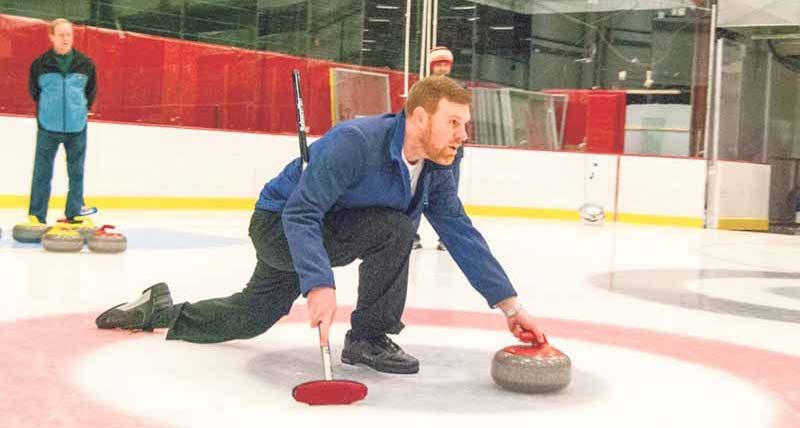 “It is [a niche sport],” Tumminello said. “But it’s huge in other places like Canada and it’s growing very rapidly in the United States. There’s always a surge around the Olympics. I think it’s a sport that’s open to everyone. It’s a very friendly and cordial sport. It’s competitive, but not ruthless. Sportsmanship is a huge part of it.”

Part of the club’s strategy for developing further interest in curling is to appeal to both enthusiasts and neophytes. Membership options are diverse in that players who are unfamiliar with curling can learn while playing on a team, with first-time curlers offered a discount. Associate membership is offered for those who don’t want to play weekly and would rather play less regularly. In addition, the club offers specialized sessions for new players. Open house sessions serve as a brief overview of the sport, while “Learn to Curl” sessions are more involved and delve into strategy and technique. Tumminello believes that part of curling’s appeal can be attributed to its accessibility relative to other sports.

“We like to mix new players with experienced players so they can learn,” he said. “It’s a quick sport to pick up. It takes years to master. But you can’t just pick up basketball and play with people who have played for 10 years. We have people who come once a week and we have people who come year round. There’s definitely a range.”

This year, the club has split its fall and winter leagues into two separate seasons. The full winter 2017 session will run on Saturdays from January through March and will take place at the Long Island Sports Hub. The next Learn to Curl session is set for Feb. 25, predating the four-week league that begins on March 4.

“We’re a very diverse group of people with different backgrounds and personalities,” Tumminello said. “People get to play a sport they thought they’d never have the chance to. It really is the people who make this club. Every time we have an event, I hear about how nice the people at the club are.”

For more information or to register, visit www.licurling.org.