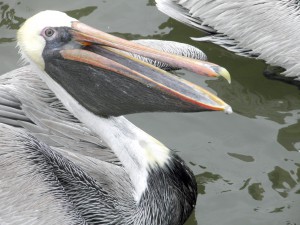 It’s a shutout. I’m walking over a mile-long Florida drawbridge from Anna Maria Island to Cortez hoping to get some pictures of brown pelicans and cormorants flying over and beneath the bridge. Not a bird in sight. I go to the Tide Tables restaurant in this small fishing village which, as stated on their menu “was settled in the 1880s and now is the last working commercial fishing village on Florida’s Gulf coast.” Leaving the restaurant ninety minutes later, I have 229 avian images.

On the dock at a fish cutting station, an affable compact man wearing a gray sweatshirt and camouflage cap named Chad, is slicing fish with the ease and acumen of someone who has been doing this all his life. He has an attentive audience of some two dozen brown pelicans in the water below the dock crammed in front waiting for throwaway pieces. These are Chad’s minions. As long as he’s cutting, he’s guaranteed company. As a piece goes over the railing, scabbard-like bills are raised in unison as the pellys rush toward the prize like baseball fans in the stands, gloves up, all vying for a ball headed their way.

Dull brown non breeding pelicans compete with those with frosty heads and necks that are breeding. There’s a rush of bodies slapping against water and the scraping of huge bills, then the struggle for this piece looks over. But it’s not. The struggle may go on “for a long, long time” as Chad says. Looking into the water there are four huge pellys, each one has a piece of fish in its bill as they attempt to pry the rest from others.   A fifth one tries to dive over the top of them, but there’s no room. Two others are locked in a silent struggle over another filleted piece, like hockey players on a face off for the puck. They move under the dock, the winner not yet determined.

There are some fringe players on the dock. Standing by Chad’s work station are a great egret and a snowy plover. One of the brown pellys stands on the railing beneath the roof of the work station curiously surveying its brethren below who resemble eager spectators at the Roman Colosseum. I’m snapping pics and have appropriated a wooden counter for the tools of my trade: a notebook, pen and camera. Looking around two pellys are standing just feet from me looking still as a museum exhibit. I’m silently startled. You can’t get anywhere near these birds when they are on the beach without them flying. On the dock, snowy egrets scurry and a few brown pellys are spreading their wings. A snowy egret perches atop a large black Suzuki motor surveying the scene. I’ve never had it so good. 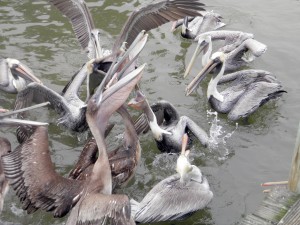 Chad is taking the fish inside and says that when he leaves, the herons and egrets will be on his work station. “One’s sneaking up on you now.”  Sure enough, atop the A-framed roof of his work station is a great egret.  It takes a little while but a snowy egret goes to the table snagging a few small snippets. He misses one which I put on the dock which is soon in its bill.

A great egret comes to the work station, walks slowly, bending and twisting like a ballerina to get a small piece of fish. I find the number of curves and twists into which it bends its long body to be pure beauty. Another snowy egret is on the side of the work station pecking bits of fish flesh that have fallen into the crevices. The sun starts to break slightly through the clouds. On the dock’s other side, a brown pelly leaving a V wake in its path gradually paddles close and disappears underneath, perhaps to go to the other side and join the hopefuls.

When he comes back, Chad, whom I later learn can cut 200 lbs. of grouper in 90 minutes, says that maybe they’re slowing down because they’re getting full. No bird however is easily giving up their place. A great egret makes a loud, long guttural sound after scaring off another that wanted the post on which it was perched. Another great egret chases off a snowy who goes to the table scoring some pieces. A brown pelly croaks loud and long at a possible intruder. Another great egret comes in croaking loudly like a train whistle as it lands on the work table as if to say “clear out boys, I’m comin’ in.”

Like all spectacles it is starting to end, but there’s one last hurrah. Chad and another guy are carrying a heavy wooden box of fish pieces and spill it into the water on the far side of the dock where a group of pellys has gathered. Some are trying to down large pieces of fish which is a fruitless task. “They’ll be doing that for a while,” says Chad, “then they’ll realize they can’t eat it and it’s a big waste of time.”

After leaving I walk about a mile to the end of a nondescript street where there’s a fish processing plant. I traverse an uneven dock walkway made that way from the weight of untold numbers of feet where there are metal traps with buoys inside and boats all but abandoned awaiting the scrap pile. At the end in the water on a sandbar are over a hundred white pelicans. These birds are larger and heavier than the brown pellys and are fresh water feeders. Against a gray sky with limited visibility, this scene might have been enacted thirty million years ago. I aim my camera at the birds and start composing. All this because of a walk over a bridge that didn’t go right. Hey, has this been the best birding day of the year, or what?