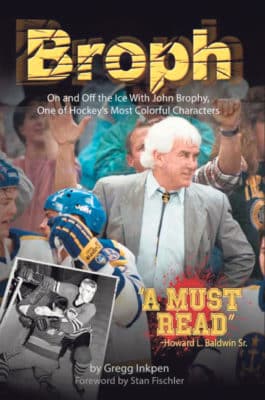 Gregg Inkpen, an author and avid sports fan who resides in Massapequa Park, has been digging into the history of the now defunct hockey team known as the Long Island Ducks. In the 1990s, Inkpen wrote and produced a documentary on the team, interviewing a bunch of former players who still lived in the area. One player, however, stood out to him in his research: John Brophy. He read many of the crazy stories surrounding the minor league legend and decided to look into it further.

“I started asking some of the players about John and if the crazy stories written about him were true,” said Inkpen. “They said yes, it’s pretty much all true. You read about him being thrown out of games and getting involved in stick fights. In 1967, they actually had a John Brophy day while he was still playing because he was beloved by that franchise.”

Inkpen had the opportunity to interview Brophy in 2001 at an arena in Atlantic City. After one interview, he realized he had so much material to work with that he decided to write a book. Following two more interviews with Broph in 2004 and 2008, Inkpen had all the stories he needed and published Broph 10 years later on Dec. 10. The book tells the story about the on and off the ice life of one of hockey’s more memorable characters.

“When you read these stories about him, you look at him as if he is an ogre,” said Inkpen. “But when you meet him, he didn’t have a deep voice. It was quite the opposite. He was quite calm and he answered everything I asked him. He didn’t always go deep into his answers, but he made sure to answer my questions. He was great.”

One of the stand out aspects of Brophy’s life was the fact he had to deal with a lot of adversity in his life. He lost his mother at the age of three, his father died the day before his first wedding, and dealt with two separate fires that completely destroyed his home. He also went through two separate car accidents, one in Dix Hills that killed his girlfriend and another in Canada where he nearly died after rolling the car over.

“It’s weird because all of those incidents happened to him and I don’t know how he got through them, especially with a lot of them happening at a young age,” said Inkpen. “Hockey and sports in general was his thing that kept him going. In addition to hockey, he was also a really great baseball player.”

Though he was originally from Antigonish, Nova Scotia, Brophy had a second home in Long Island. When he was not playing hockey for the Ducks, he was working with construction companies buildings schools throughout the island, including Hauppauge High School. Following his playing years, he began his coaching career on the island as well with the North American Hockey League’s Long Island Cougars.

“He was given the offer after he retired and he was just winging it,” said Inkpen. “Lots of people will forget this, but a few seasons prior to coaching, he was suspended a year for pushing down a referee. During that suspension, he was hired as the coach of the Ducks. He had a tough season, but the players liked him. He had a fiery personality with a knack for winning.”

When the mid-1980s came around, Brophy was able to get some NHL coaching experience. Following a few seasons with the Birmingham Bulls of the Central Hockey League, he took a job with the Montreal Canadiens running their affiliate Nova Scotia Voyageurs. After three seasons there, he was hired by the Toronto Maple Leafs to be their new assistant coach.

“He had a few seasons under Dan Maloney and also coached the AHL affiliate St. Catharines Saints,” said Inkpen “After the 1986 season, Harold Ballard loved John Brophy and decided to bring him on as head coach of the Maple Leafs after letting go of Maloney. He loved the way he led a team and handled the press. Brophy just asked Ballard to pay him like a pro coach because he had been coaching for a few seasons.”

After a tumultuous end with the Leafs a few seasons later, Brophy was caddying for his wife when he got a call to return to the minor leagues and coach in the East Coast Hockey League. He did so for the Hampton Road Admirals and Wheeling Nailers until 2003, and officially retired from coaching in 2005. He passed away after a long illness at the age of 83 in his home in Antigonish.

“He is credited with getting players to the next level,” said Inkpen. “Whether it was moving players up the minor level or right to the NHL. A lot of the players I talked to told me that they took his passion with them to the next level. He worked hard and a lot of the players took that with them. In terms of the man off the ice, when you read the book, you’ll learn a lot about his personal life, his life on Long Island and beyond.”

If you are interested in reading more about John Brophy, Broph: On and Off the Ice With John Brophy, One of Hockey’s Most Colorful Characters is available for purchase on Amazon.