Children of a Lesser God, the Tony-winning play by Mark Medoff, explores the relationship between a deaf woman and hearing man in the U.S. in the late 1970s. The revival stars Joshua Jackson, in his Broadway debut as James Leeds, a teacher at a state school for the deaf, and Lauren Ridloff, in her Broadway debut as Sarah Norman, a “pure deaf” woman who wants to be understood, not pitied. Ridloff is deservedly nominated for a Tony for her performance as a woman caught between worlds.

The play begins with the characters at odds due to Sarah’s deep distrust of hearing men. As a speech pathologist, James intends to teach her to speak, despite her fierce reluctance. He wins her over romantically, but remains determined to “fix” her.

This dynamic is never more apparent than in the scene Jackson animatedly describes that music is more than a vibration to a hearing person. Music is magic. It transcends sound. And he feels sorry for his wife’s inability to experience that no matter how much she explains that his love of music is enough for her.

The play deals with topics that may seem outdated to some, such as equating deafness with “mental retardation” (today referred to as intellectual disability), a perspective that has never had validity, but does persist among the ignorant.

The original run in 1980 came on the heels of major changes to residential schools for the deaf, like the one depicted in Children of a Lesser God. After a series of scandals in the 1970s, more deaf people were encouraged to become teachers, no longer considered incapable.

Ridloff’s powerful, yet elegant, performance is irresistible to watch as Sarah fights against being forced into boxes by those around her.

Jackson (Dawson’s Creek, Fringe) does much of the heavy lifting on stage as the designated interpreter of Sarah while she is in the hearing world. He seamlessly carries on two ends of a conversation in both sign language and spoken English, especially impressive because he learned Signed English for this role.

The drama has several light moments, which often come from phrases that don’t translate easily. Jackson delivers some punchlines in between monologues, the most memorable of which is his unvarnished explanation of veal piccata.

ER’s Anthony Edwards makes his Broadway debut as Mr. Franklin, the supervising teacher at the school. His character represents an old way of thinking, while the other characters try to forge a new path.

The cast includes Kecia Lewis, as Mrs. Norman, who struggles to relate to her deaf daughter, Treshelle Edmond, as Lydia, a schoolgirl with a crush on James, and Julee Cerda, as Edna Klein, a well-meaning lawyer that fumbles her way into the deaf community.

Together these characters try to convey the need for listening, rather than making assumptions or judging.

Spare staging, designed by Derek McLane, allows the characters the space to express themselves. As the most accessible play on Broadway, Children of a Lesser God features supertitles, where the play’s text is displayed above the stage, much like closed captioning on television. Audience members also have the option of using the GalaPro app to follow along on their phones. By July, GalaPro and other services like it will be available at all Broadway shows for the deaf and hearing-impaired. 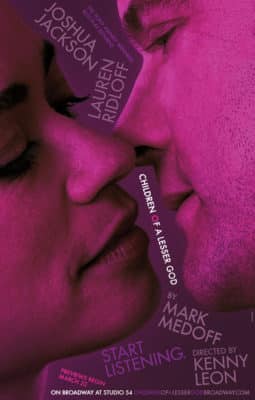 Children of a Lesser God is directed by Tony Award-winner Kenny Leon. See the play at Studio 54, 254 W 54th St., NYC, through May 27. For tickets, visit childrenofalessergodbroadway.com.