Broadway Records has released “More Than Me,” a single from Michael Mott’s newly released album, Abandoned Heart, as a benefit single for Puerto Rico.

It was announced last night at Mott’s concert celebrating his album release that 100 percent of the profits will be donated to The American Red Cross to help those affected by Hurricane Maria. 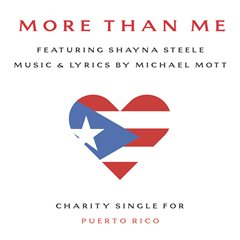 In a joint statement, Michael Mott and Broadway Records president Van Dean said, “We are deeply saddened by the devastation that Puerto Rico experienced from Hurricane Maria. As artists it is important to do all that we can to help others and that is why we are donating 100 percent of the profits of ‘More Than Me’ to help aid the victims in Puerto Rico. This song is about community; about lending a helping hand and offering love and support to those in times of need.”

The single can be purchased at www.BroadwayRecords.com and on all digital platforms including iTunes and Amazon Music.

Michael Mott is a composer, lyricist, singer, actor and voice teacher living in NYC.  Born and raised in New Hartford, New York, Michael graduated from Ithaca College with a Bachelor of Fine Arts Degree in Musical Theatre Performance. After graduating, he moved to New York City and enjoyed a successful career performing in numerous Off-Broadway, regional and national touring shows.  In 2012 he decided to shift his focus to writing and was accepted into the prestigious BMI Lehman Engel Musical Theatre Writer’s Workshop.  He has since been named one of Playbill’s “Contemporary Musical Theatre Songwriters You Should Know.”

Michael’s debut album, Where The Sky Ends, is a compilation album of his original theatre, jazz and pop music performed by some of the best singers on Broadway, co-produced by Mott and legendary orchestrator/producer Kim Scharnberg. The LP has been referred to as “a masterpiece” by Broadway World and was released by Grammy Award Winning label, Broadway Records on June 17, 2014. Due to popular demand, Where The Sky Ends: The Dance Remixes was released by the same label on Oct. 14, 2014, and spawned the popular dance track, Gone (Julian Marsh Ethereal Mix). In 2016 he composed a Christmas single for Broadway star Laura Osnes, co-produced by Mott, Scharnberg and Jeremy Roberts. Christmas, Will You Stay? was released digitally on his own label, Motta Music, on Dec. 6, 2016.

His follow up studio album, Abandoned Heart was released on Sept. 15, 2017, by Broadway Records. This time, Mott took a much broader approach honing his voice and focusing on a more top 40 sound. Joined by some of Broadway, television and pop’s most celebrated talents, this record offers a variety of feel good pop, anthemic soul and introspective ballads co-produced by Mott and Rich Matthew. His entire discography is available wherever music is sold.

In 2016, Broadway Records launched the Broadway for Orlando initiative (in partnership with creators Seth Rudetsky and James Wesley) as a response to the Pulse nightclub mass shooting, resulting in the all-star benefit single, “What the World Needs Now is Love.