One of music’s more underrated guitar players, Brian Setzer has been nuts about rock and roll ever since hearing The Beatles play on the jukebox of a Farmingdale pizzeria around the time he was seven. (“The minute I heard George Harrison’s guitar, I knew what I wanted to do with my life.”) While it would be easy to lazily define him as merely a revivalist be it rockabilly (The Stray Cats) or swing music (Brian Setzer Orchestra), Setzer’s technical abilities have gotten him invited to play alongside Robert Plant (The Honeydrippers) and Twisted Sister (Come Out and Play), to tackle classical music (Wolfgang’s Big Night Out) and even to bang out an Americana-flavored album (1986’s The Knife Feels Like Justice).

Click here for the full interview with Brian Setzer

The following are some of the Long Island native’s favorite string-benders. 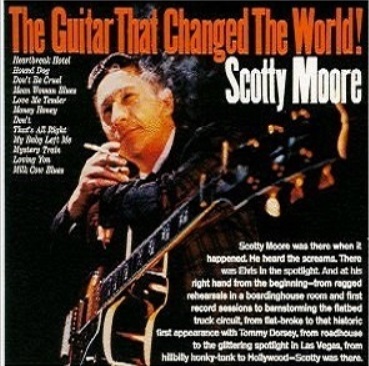 “Scotty Moore was Elvis’ original guitar player. What Scotty did was what I try to do is create a new sound. When he first recorded with Elvis, he didn’t have a road map. He just did it. Of course he had influences, but what he did was start rock and roll. He’s my favorite, overall guitar player.”

“When you go into the swing era as far as guitar players go, it’s gotta be Django Reinhardt. Everybody has to mention the guy. Again, there was nobody before Django—there were players, but no one like that. When he came, he created a whole new thing out of jazz, which was in its infancy.”

“What Cliff Gallup did is in my neck of the woods—I love that kind of playing. He took what Scotty Moore did in the 1950s and brought it to the next level. That tone and guitar sound is what I love the best. It’s twang, echo and vibrato. That guitar sound has always been in my head. Just listening to TV, I’m hearing all of that again. For years, it was just overdriven, heavy metal guitar. Whenever you’d hear something like a Chevy truck commercial, it was just kerrang. Now you hear echo and delay.”

“I just saw Dave Edmunds—he’s not on the tip of everyone’s tongues—his name is not that familiar. He gave the Stray Cats our sound because he produced those early Stray Cats records and we owe him so much. He got it and didn’t make us sound like we were stuck in the 1950s. He made us sound new and that was the whole idea. I never wanted to sound like an old record. I wanted to sound like a new record with all the sounds I like and he did that. He’s one of my favorite guitar players. He’s another player who took rock and roll and put his own stamp on it and kept going. He retired at my show in Europe this year. We did two shows and he said he came to play with me and that those were his last two shows. He lives in a small town and that’s the way he wants it. He’s done it.”