Book Reviews: Celebrating The Caesars And Charlie Hustle, Too 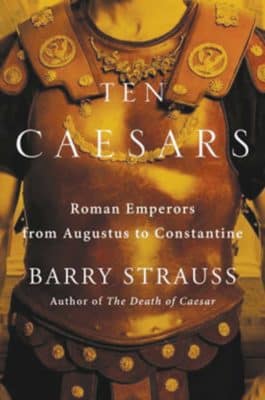 In Ten Caesars, classicist Barry Strauss takes the reader through the high tide of the Roman Empire: the 350-plus year reign, from Augustus to Constantine. These brief, Plutarch-like sketches capture the unique character of each of the Caesars: Augustus, the teenage strongman who defined the role of an emperor for centuries to come; Tiberius, who ruled in luxury, while several thousand miles south of Rome, a Nazarene carpenter changed the course of history; Nero, the homicidal madman; there is Hadrian and his wall, Marcus Aurelius, as popular as ever and finally, Constantine, who ended the 300-year long persecution of the empire’s Christians. Strauss lauds the Caesars for their survival instincts but mourns the passing of Rome and applauds the establishment of the Eastern Empire, which later fell. However, the world of the Caesars led to the world of monarchy. A republic is preferable to an empire, but a monarchy is preferable to both.

The Largesse of The Sea Maiden was the final collection of short stories by Denis Johnson, the prolific American novelist who died last year at age 67. As with Wallace Stegner, Edward Abbey and Chilton Williamson, Jr., Johnson sang of the hard-boiled West: working-class men scrambling to stay one foot ahead of the grave. Characters are constantly trapped in those do-or-die decisions that shape their fate. Johnson will be missed, but he left behind streams of fine fiction for the rest of us to enjoy.

Jim Sciutto’s The Shadow War recalls the 1950s when Russia and China were communist giants and the U.S. caught up in “duck and cover” drills over a nuclear attack by either or both. Times have changed dramatically. Russia and China are not in an alliance. Still, both challenge American hegemony, which looks to be in decline, anyway. Sciutto lists the usual concerns: hacking American elections, cyber warfare, espionage and bold military actions. Russia matters, but the rivalry of the 21st century is between the U.S. and China. When Mao Tse-Tung’s rebels took control in 1949, they immediately embarked on a 100-year plan to make China as the world’s economic and military superpower. What will happen if China does overtake the United States?

Another Pete Rose book? Why not? Has there been a major leaguer who loved the game as much as Charley Hustle? Rose is still coming to terms with his banishment from the game for gambling and the realization that he will never be selected to the Hall of Fame, at least not in his lifetime. Play Hungry: The Making of A Baseball Player is very much a love letter from Rose to his father, a legendary semi-pro athlete in Cincinnati. Not since Babe Ruth has a man put his stamp on the game the way Rose did. This book would be perfect for the budding young ballplayer, if not for the language, but this brisk volume is one of the best books about baseball that you’ll ever read. There will never be another Pete Rose.