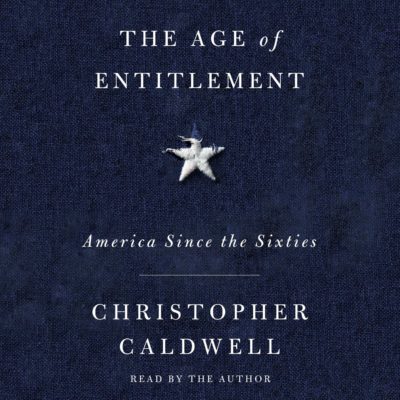 “Optimism is cowardice.” So claimed Oswald Spengler on the final pages of his 1931 polemic, Man and Technics. With the publication of Christopher Caldwell’s The Age of Entitlement: America Since the Sixties, Spengler nods. As does Sam Francis. So, too, will Pat Buchanan. For The Age of Entitlement is the most searing indictment of recent American history since the latter’s The Death of The West (2002).

Right from the beginning, Caldwell lays out his cards and sticks to them to the final pages. The beginnings of the disaster came with the passage of the 1964 civil rights bill. Granted, criticizing this landmark bill is akin to a man taking a popgun while facing an armed battalion of dragons. Caldwell plunges on. That legislation, according to the author, violated the constitution’s freedom of assembly clause, while creating another vast government bureaucracy to enforce the bill. Could private property survive such legislation? The ‘64 bill also set off a chain reaction: Civil rights followed by women’s rights, followed by gay rights. The revolution, however, wasn’t democracy in action. Prior to the 1973 Roe vs. Wade decision, 43 states outlawed abortion. Prior to the 2015 Hodges vs. Obkergfell decision, 33 states defined marriage as solely between a man and a woman. The Supreme Court wiped those state laws off the books. The revolution prevailed. But who voted for it? November 22, 1963 represented the traumatic date in modern American history.

“At the outset in the 1960s, middle-class Americans were prosperous, exuberant, enraged at the death of their president, and certain they had the resources to wage such a [culture] war, [over civil rights], ” Caldwell writes. “They were wrong about that.”

Instead, the middle class lost their country. Consider America since that date. Has a single good thing happened? Caldwell lays waste to the past 56 years: Not just civil rights, but the failed Vietnam War, the deceitful 1965 Immigration Act, affirmation action, quotas, busing, the Roe decision, the Bakke decision also on affirmation active, the Martin Luther King Jr. holiday, multiculturalism, political correctness, diversity, “hey, ho, Western Civ has got to go!,” immigration and the creation of “people of color,” the decline of white America, the failed wars in Iraq and Afghanistan, the 2008 stock market crash and above it all, the failure of the Reagan Administration to stem the tide.

Is Caldwell being fair? In 1971, the civil rights bill was used as justification for affirmative action in the Griggs vs. Duke Power Co. decision. In 1965, Americans were told that ending restrictions on Asian and Latin American immigration would not change the nation’s demographic makeup. Vietnam represented the failure of the “best and the brightest,” an educated elite who brought us America’s first failed war and with it, the passing of the once self-assured East Coast WASP elite.

The King holiday has rewritten American history into a tale of ongoing oppression. Why did the Reagan Revolution fail? With the defeat of Robert Bork to the Supreme Court in 1987, liberalism was given a second life. No one knew it at the time but Anthony Kennedy, Bork’s replacement, would turn out to the swing vote on the continuing revolution of abortion rights, affirmative action and gay rights.

And so, a nation of winners and losers. The biggest winners were corporate America. The Reagan years did not bring cultural renewal, but instead the triumph of social liberalism. Writes Caldwell: “A new social class was coming into being that had…both capitalism’s means and progressivism’s sense of righteousness. It would breath life back into the 1960s projects around race, sex and global order that had been interrupted by the conservative uprisings of the 1970s.”

Examples are numerous. Caldwell points to the boycott of unsuspecting North Carolina by corporate elites following that state’s bathroom law on gender identification. There was also the locomotive wreck of the George W. Bush presidency: The easing of credit to undeserved neighborhoods, the failed occupation of Iraq, the economic slowdown as a result of that war, the sub prime crisis, the stock market crash and the shocking consequence: The collapse of the Anglo-American neo-liberal order and China’s rise as an economic superpower, bringing with it the demise of liberal democracy itself.

The losers. Caldwell maintains, were white Americans, who saw their income drop due to the outsourcing of manufacturing jobs and their share of the population take a similar plunge under mass immigration, legal and illegal. The revolution remains a story of success upon success.

“Today slavery is at the center of American’s official history, with race the central concept in the country’s official self-understanding,” Caldwell claims. “For almost all of American history, racial conflict was understood as a set of episodes­—some shameful, some glorious­—set against a larger story about building a constitutional republic.”

The Age of Entitlement is an elegy to a lost civilization, the world of marriage, family, work and two or three children or more. It is an eulogy to a people without a country, but more important, to a people without a history. The tome closes with a reference to the rise of Donald Trump, but without any illusions. Optimism, you say? Call it cowardice, indeed.

Ed.note: This is my last ill-tempered review for a while. More conventional books, later.