Bonnie Raitt: Digs In Deep While Adding To Her Legacy 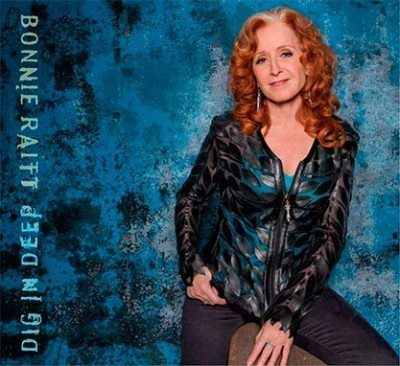 Bonnie Raitt –Dig In Deep (Redwing) – Ever since releasing her 1971 self-titled debut album, Bonnie Raitt has used a combination of unparalleled guitar playing, sweet crooning, and mix of unconventional covers and stellar originals to create a sturdy canon. So it goes with her 20th album and the second on the California native’s independent Redwing imprint. Raitt went into the studio with her veteran road band and emerged with a collection of songs informed by the loss of both her parents and older brother in the past decade plus, along with the perspective of someone looking back on her life.

Raitt has admitted that her 2012 Redwing debut Slipstream gave her a sense of creative renewal that clearly carried over to the follow-up, which contains five songs written or co-written by her, the most since 1998’s Fundamental. One of those numbers, the self-penned “Unintended Consequences of Love” opens this collection with just the right mix of snappy syncopation, crying slide guitar and Raitt looking for a bit of romantic rapprochement. From here, the sexagenarian rocker doesn’t falter, hopping on piano to provide a rollicking counterpart to Mike Finnigan’s Hammond B-3 organ on the gospel-flavored original “What You’re Doin’ To Me.” Elsewhere, she shows there are few that can touch her as a balladeer be it on Joe Henry’s “You’ve Changed My Mind” (a poignant leftover from the Slipstream sessions) or her own “The Ones We Couldn’t Be,” a sparse number that finds Raitt breaking your heart with lines like, “I wrap the dark around me/There’s no solace here tonight/There’s just wishing and regret for company.”

Raitt’s knack for interpreting other people’s songs also remains pretty solid. While her reading of the 1987 INXS hit “Need You Tonight” is fair to middling, Raitt and her crew totally tear up the Los Lobos classic “Shakin’ Shakes” with blistering slide guitar and plenty of Finnigan’s funky organ. An unapologetic social activist, Raitt lets her music do the talking with help from her longtime sideman George Marinelli on the Stonesy rocker “The Comin’ Round is Coming Through,” whose lines “You got a way of running your mouth/You rant and rave, you let it all out/The thing about it is, little that you say is true,” make it a pointed diatribe perfect for everyone tired of political figures talking out of both sides of their mouths. No surprise here that with age, Bonnie Raitt has only gotten better and more relevant.