Bob Saget: The Man, The Marvel, The Legend

Danny Tanner on Full House, the host of America’s Funniest Home Videos, the future voice of Ted Mosby in How I Met Your Mother and two Broadway performances. With so many memorable and solidifying roles, how does one pinpoint Bob Saget’s greatest entertainment accomplishment? He would tell you in one breath it’s stand-up comedy, and it’s easy to see why.

“One of the most fun things I ever did was stand-up. I’m loving it more than ever, and people are loving it,” said Saget, who has been cracking the comedic whip for more than 30 years.

If you think that Saget’s role on Fuller House seems overused and tired, he will be the first to prove you wrong. Fuller House, the sequel series to the hit family sitcom, finds D.J. Tanner Fuller a recently widowed mother of three, an almost identical role played by Saget years ago. The show wrapped up a successful second season on Netflix and is already gearing up for a third. Jodie Sweetin and Andrea Barber reprise their roles as the main cast along with special appearances from John Stamos, Lori Loughlin, Dave Coulier and, of course, Saget, America’s favorite lovable neat freak of a dad, who said he’s known about a sequel for a long time.

“I’d known for 10 years about a sequel, because Bob Boyett has been wanting to do it forever. Jeff Franklin, John Stamos and I said let’s do a movie, but they couldn’t get it going,” said Saget, grateful for the window opportunity that Netflix provided to pick up the idea. “Netflix wanted to make family television and they did it in the perfect way.

They kept the original tone of the show, and cast it very well with the kids. I’m really happy that it’s back.”

The feel-good family show is not the only thing Saget has on his plate. He also loves to direct and is developing a new multidimensional show that better reflects his personality.

“I’m directing an independent movie, which I haven’t done in several years, called Jake. I believe my son is on meth, so my girlfriend calls an intervention on Facebook and we find out that the people around the kid are more screwed up than the kid,” said Saget, who has been attached to the script for five years. “It’s a very creative time for me. I never stop writing because it’s how I cope with my everyday life.”

As for his comedy shows, for people who see Saget’s routines expecting his character of Danny Tanner only to discover a completely different persona, Saget said that the HBO comedy special That Ain’t Right put an end to that assumption. 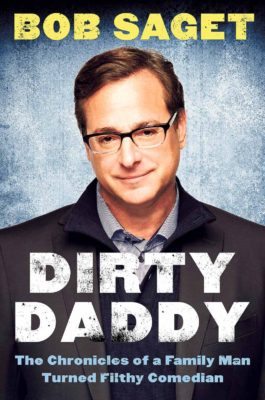 “I’m me and I think two-thirds of my audience didn’t watch Full House, so some just know me from my stand-up routines,” he said, adding that his 2014 memoir Dirty Daddy, which is a New York Times best-seller, was Saget’s chance to get everything off his chest. “It turned out to be a memoir and a comedy book, but I just told true and relating stories about my life.”

As for his upcoming show at the NYCB Theatre at Westbury, Saget said the show is more about life experience than anything he has ever done.

“Half of the show is music and I like to riff and adlib; I do that when I’m performing,” said Saget. “My stand up is funny and silly, and yet it’s based on reality. I’m trying to not talk about what’s going on in the world right now, but I’m truly a compassionate person.”

Saget said Westbury is one of his favorite places to play and his new hour is similar to his book, Dirty Daddy.

“I have audiences of people in their 60s and 70s and then 20s and 30s, but it doesn’t matter because I love entertaining people,” said Saget. “It’s about taking them out of what is going on in the world that’s upsetting them and allowing them to have an entertaining and fun night. Laughing is so real, and I like to see that.”

A cause close to Saget’s heart is raising money for scleroderma, a disease that took the life of his sister in 1994. As a board member of the Scleroderma Research Foundation, Saget helped to raise $800,000 in New York this past fall at Caroline’s Comedy Club. To date, the foundation has garnered more than $40 million so far.

“Robert Klein said he would do anything to help, and I find that with comedians more than anyone else; they are a very sensitive group,” said Saget of his comedic peers. “It’s a disfiguring disease. Scleroderma means ‘hard skin’ in Latin, and a lot of times people die from pulmonary hypertension. It affects mostly women in the prime of their lives.”

Another scleroderma benefit in June will honor Saget in Los Angeles. He hosted his first benefit four years before his sister was diagnosed, but it was Robin Williams who first held the reins.

“Robin was one of the biggest hearts that existed, besides him being ridiculously talented,” said Saget of the late actor and comedian. “The research our board has done [srfcure.org], it really is amazing what has been accomplished. It’s been quite a journey and I’ll do it the rest of my life.”

After his appearance on Long Island, Saget is busy touring all the way through May before shooting Jake until June. All of this while filming season three of Fuller House in between. The man, the marvel and the legend that is Bob Saget is generational, and as long as he can make you laugh, he’s OK with that.

Bob Saget performs at the NYCB Theatre at Westbury on March 24 at 8 p.m.. For tickets, call 516-247-5200 or visit www.venue.thetheatreatwestbury.com. Visit www.bobsaget.com for more on the comedian.

Wonder who Bob Saget calls friends? Check out: Bob Saget Gets By With A Little Help From His Friends