BMW Combines The Past And Future With All-New 8 Series

It’s a legend. It’s designed to race. Oh, and it’s made to drive across Long Island, too.
Meet the all-new BMW 8 Series convertible. Sound familiar? Well, that’s because the German auto maker just rejuvenated this grand touring machine for the first time since 1999.

“The 8 Series has been a legend in the BMW name and it hasn’t even been a factor for the last 20 years,” Zehan Joshi, a member of the BMW of Oyster Bay Genius team, said. “The hype around this car has been incredible.”

This is one of the sleekest cars you will see on the streets of Long Island. The 8 Series features technology galore, including a remote start, Apple CarPlay, a navigation system with real-time traffic information and 360-degree cameras, even showing you a bird’s eye view of the car.

The legendary car is finally back, combing the look of the 6 Series with the traditional 8 Series exterior. The convertible is just the icing on the cake.

“With the convertible, you can hear the V8 to where it’s not like any BMW V8 before,” Joshi said. “It actually sounds like a muscle car. You can easily turn that off if you don’t like it and make it the way you want it at the click of a button. If it’s too loud, you can turn it off.”

The newest member of the BMW lineup goes from 0 to 60 mph in 3.8 seconds. It has an eight-cylinder, twin-turbo 4.4 liter engine, revving up to 523 horsepower.

“What makes it different from BMW’s other cars is it’s one of the first sports cars with four-wheel steering, even compared to the M-cars, like the M5, which is supposed to be our track car,” Joshi said. “A car for the everyday road usually handles better than a track car.”

One of the unique features of this open-top vehicle is four-wheel steering, which literally means each wheel turns when you move the steering wheel. The rear wheels don’t turn as much as the front ones, but it provides an exceptional amount of grip, tighter turning and an increased straight-line stability.

“It can be luxury and it can be muscle,” Bruce Glassman, general manager at BMW of Oyster Bay, said. 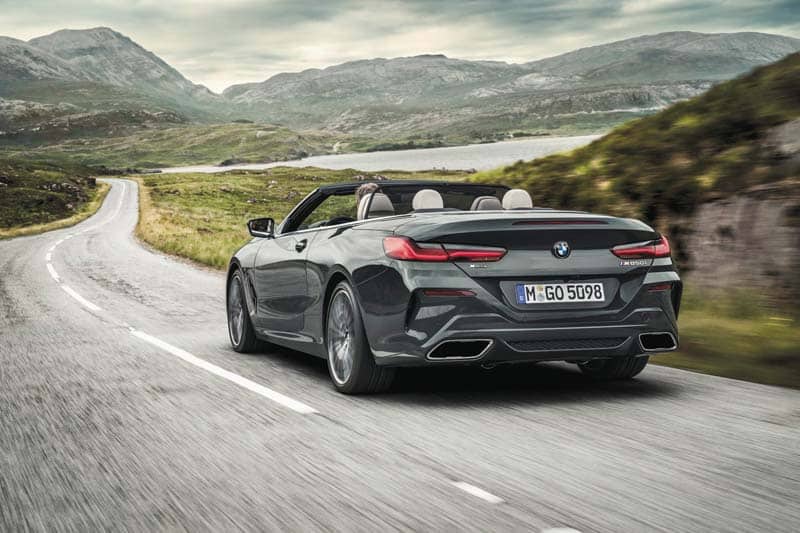 This car even includes a neck warmer that can be adjusted underneath the headrests based on a person’s height inside the vehicle.

“The best thing about the car is you can say so much about it, but the drive alone makes people feel incredible,” Joshi said.

Of course, BMW implemented some new technology into this car as well, besides the four-wheel steering.

“Through the satellite around the car, you can see real people,” he said. “One time, my dad took my car and I was able to track him. I could even see him closing the door. It’s one of the first German cars that has a remote start. The others always said it was an issue. Even BMW said it was an issue because of how the emissions worked. But they finally said, ‘Let’s do it.’ It works absolutely incredible. It has been available with other manufacturers, but they wanted to make sure they can do it properly. Like the car can drive itself if it wanted to. All the technology is there with the car.”

Worried about parallel parking? So is BMW. The engineers in Munich don’t want you to get a single scratch on your expensive luxury ride, and that’s why they added some self-driving features, specifically in terms of parking.

“You put the car in reverse and you have a backup assistant, which remembers the last 180 feet of your trip,” Joshi said. “It steers itself out, remembering the exact maneuver that you did. You just need to make sure no cars popped up behind you.”

Forget those pesky pot holes on the LIE or the Northern State Parkway. You’ll barely feel a thing. If you’re looking for the perfect car to go on a joy ride in, you just found it. This is the ideal racer to drive to the Hamptons in, or even to go across the country.