Blown Out Of The Water

On the outskirts of the small Brookhaven village of Blue Point lies Blue Point Dock, a short pier where locals can be found fishing, walking along the shore and engaging in other activities typical of coastal communities. Upon looking a few feet into the distance, if for a moment it seems as though there’s something hovering just above the water’s horizon, that’s because there is. No it’s not a seagull, it’s a flyboarder.

What is flyboarding you ask? Described as part wake boarding, part jet skiing, the act of flyboarding involves being strapped into a pair of boots with jet nozzles underneath, and thrust into the air as a high-pressure stream of water is forced through those nozzles. Safe? Apparently. Terrifying? Yes. Exhilarating? Absolutely.

Thanks to FlyboardLI, the first flyboard rental location on the island, I was able to try what their website describes as “the most extreme water sport to hit Long Island” for a 30-minute session.

Despite several discouraging flops and a whole lot of water up the nose, the feeling from a successful attempt is indescribable. It is natural to want to look down, attempting to focus on maintaining your balance, but if you look up for just a second, true to the activity’s name, it really does feel like you’re flying. 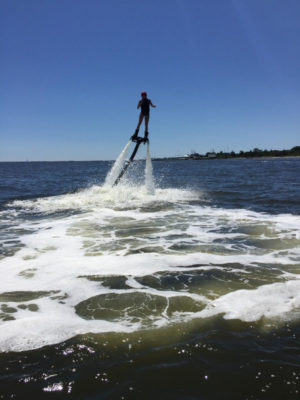 According to FlyboardLI founder Jimmy Bisset, who established the brand in downtown Riverhead before moving to Port Jefferson and then its current Blue Point location, flyers can reach up to 35 feet above the water. Though at the time I was certain I had done just that, the photos and videos tell quite a different story.

Nonetheless, it was an incredible experience that, in my opinion, transcends all other water sports. Just a warning, if you do decide to flyboard one day, prepare to be unenthused by jet skiing, parasailing, banana boating and other vacation-esque activities.

My reaction is typical of most first-timers, many of whom don’t remain first-timers for long. Those who try the sport are often eager to try their luck again, noting that they were just starting to get the hang of it toward the end.

The secret to achieving a good lift is all in the legs and feet, as you must keep your posture as straight as possible, pointing your toes to either hoist yourself higher or lower yourself back down. Apparently this is how you do flips, twists and turns as well, but I figured I wouldn’t break out those moves until my next flyboarding stint.

“Next time you’ll be able to do all kinds of tricks,” said current co-owner Travis Friedmann, attempting to mask his sarcasm. I responded with an unconvincing, “Totally.”

Friedmann and co-owner Sean Petterson jointly operate the business on weekends during the summer, this one marking their second in Blue Point. When the two seasoned flyboarders became aware that Bissett was looking to sell the business, they were quick to hop on the opportunity.

“Sean took his first flight and loved it so much, we figured we could run the business ourselves,” said Friedmann.