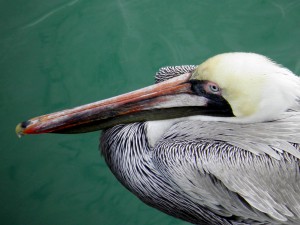 My birding class had its last scheduled field trip on a Longboat Key beach thick with fog that had closed the port of Tampa 61 miles from here a few days before. We went anyway.

The day before I’m on Whitney Beach walking the walk at the same time that my class will be here tomorrow. There’s medium fog and when the sun comes out it burns through my back. There’s a very large number of gulls and terns this morning that I call the “Assembled Multitude.” This group consists of various terns and gulls that are here most days along with smaller brown shorebirds. I want to check the pathway through the dunes that the class will take. No need. It has at least forty seniors coming through with name tags, plastic bags and plastic field guides. They are a Road Scholar shelling class from Sarasota. I’m set for tomorrow.

The next morning the fog is thick as pea soup. On the beach, before the group arrives, there’s a ghostly line of scattered shorebirds. The group is apprehensive about what we can see. I reassure them by explaining that the peculiarity of fog is that while it limits the distance one can see, it highlights what one can see. Our first birds are a huddle of sanderlings, slightly plump sandpipers with bright brown backs, white bellies and breasts. I silently thank them for being here. A sharp eyed, studious woman says “what’s that?” She’s pointing to a 6.25-inch snowy plover near them. “This is the rarest bird that you’re going to see here today,” I tell them. Light as the sand, this plover, sometimes called the Cuban snowy plover, blends in totally. The best way to see the snowy is to stumble upon it or to see it running. Once the snowy plover stops it can literally vanish before one’s eyes. This is exactly what happens. “Where’d it go?” the woman says. Soon we see others nearby; an excellent start.

There are a group of willets, which are large sandpipers, also grouped together. They move as we come closer. One hops away on one leg which they often do because they rest on one leg. However this one’s leg isn’t coming down. I think that I see the foot partially showing. The group is convinced that this is a one legged willet. I’ve never seen a bird lose a leg completely and think its landing gear is stuck. 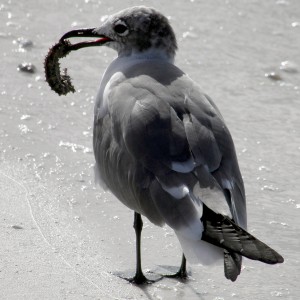 The “assembled multitude” of gulls, terns and assorted shorebirds is here in large numbers, all preening or standing still. The group wants to know what they do. I explain that this is how and where they socialize. Also there’s safety in numbers from predators. One laughing gull is yawning with its bill open showing a blood red mouth, a nice contrast to the fog. Some of the laughers’ heads are turning into their black summer plumage while others are still dull winter gray. One’s head is blackening while some white still shows on its face like fallen snow. “Look closely at their bills,” I tell the group. You can see red starting to come in, also a sign of summer plumage.

There are a few ring-billed gulls walking around. They are so named because the tips of their otherwise yellow bills have a black ring. What appears to be a lesser black-backed gull with a dark charcoal gray back is also here. This is an uncommon bird here. There’s a large immature herring gull which is all brown and white, standing out among the sea of gray colored gulls, also uncommon here, which takes off. There’s one laugher which is not yet fully adult as it juvenile gray shows on its lower back. It’s is subtly beautiful.

Royal terns with large orange/yellow bills stand out even in this shroud of fog. They, along with the laughers, make up the largest groups in the assembled multitude. There are a number of Forster’s terns whose reddish legs are visible and someone asks what it is. I also point out that their heads which are white in winter save for a black arrow-shaped eye patch are starting to turn fully black. There are also a few sandwich terns with black bills that have a yellow tip. However that yellow needs sunlight to illuminate it. A few royal terns and a large brown pelican appear out of the fog, quickly disappearing back into it. Apparitions.

We start to walk and a royal tern very slowly moves out of our way. “He’s a tough one,” says a woman. Actually, they are very gentle birds. Someone asks, do I notice birds’ behavior. I explain that after a while one cannot help but see that birds have different “personalties” or temperaments and mention a few. We walk more in this soup which leaves a 50-yard visibility in either direction. All we see are a few willets in the water searching for shells. Someone wants to know what they eat and I explain that their food often consists of hard shells which they can digest. Despite having no teeth, they instead have gizzards, tough stomachs which grind up their intake. If they had teeth and heavy jaw muscles they couldn’t fly.

The group has watched with such interest and questions that I think they would have stayed longer. Afterward in the parking lot I show them a few plates of some birds we’ve seen from an old library copy of Audubon’s, Birds of America. I want them to see how the great naturalist painter depicted these birds. Interestingly when we get to the sanderlings, the first bird that we encountered this morning, the print is striking and very much like what we saw. They murmur in appreciation. You can see a lot birding in the fog.