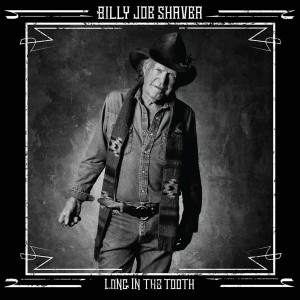 Billy Joe Shaver’s name may not be as well-known as fellow outlaws Waylon Jennings or Willie Nelson, but the man is certainly a country music institution.

Of course, the ageist institution that is commercial country music radio wouldn’t touch this 75-year-old singer-songwriter with a 10-foot pole. Look no further than his grizzled appearance and the declaration that the title cut of his 23rd studio album makes. And while these 10 songs clock in at a concise 32 minutes, there’s not a wasted note to be found here. Country music has always been a genre steeped in the art of storytelling and Shaver is a raconteur of the highest caliber. He embraces his age over a torrent of squalling guitar riffs and Jew’s harp accompaniment of storied harmonica player Mickey Raphael on “Long In the Tooth,” pours out the sentiment in honky-tonk weeper “I’ll Love You As Much As I Can” and is aided by the saloon song piano runs of Leon Russell as he shares tales of booze-fueled hijinks on the honky-tonk gem “Last Call for Alcohol.” Equally moving is the Tejano ballad “American Me” which reeks of Shaver’s Lone Star roots.

The Texas native even wryly decries the state of country music amid the crying pedal steel and accompaniment of Nelson on the opening cut “It’s Hard to Be An Outlaw” where the couplets “Some superstars nowadays…./Go and call it country/But that ain’t the way it sounds/It’s enough to make a renegade like me/Want to terrorize this town.” It’s a sentiment that fans of true country music who’ve turned to the Americana music movement can fully embrace, even as a younger generation basks in the fraudulent sounds that clutter the commercial country music airwaves. Elsewhere, Shaver’s eye for the inequities in the world manifests itself in “Checkers & Chess,” where he notes “Nothing’s fair in this world of lying shame/The rich man steals the money/The poor man takes the blame.”

Tooth winds up being a stellar primer in the art of making country music that’s not being given the proper due that it should be getting.