Between The Pipes With Kelly Hrudey

Kelly Hrudey is best known for the 15 years he played goal in the National Hockey League. Drafted by the New York Islanders in 1980, Hrudey was traded to the Los Angeles Kings in 1989, where he spent the next eight years that included a memorable Stanley Cup Finals run in 1993 that found the Kings eventually falling to the Montreal Canadians, 4-1. Hrudey finished his career with the San Jose Sharks in 1998 and is currently an analyst for Hockey Night in Canada and a color commentator for the Calgary Flames. All of this and more are some of what you’ll find in Calling the Shots, the recent book the Edmonton native recently wrote with co-author Kirstie McLellan Day.

Having been asked to work on a memoir quite a number of times over the past 20 years, Hrudey penned a few chapters during the 2012-13 lockout, which made him realize, “I’m not a very good writer.” McLellan Day, who has previously worked on books with former players Theo Fleury and Bob Probert, met with Hrudey and convinced him to return to this project. Multiple meetings in person and on the phone with his writing partner made for this being both a rewarding and moving experience.

“The most difficult part was writing about some of the conflict. It’s not a comfortable thing to write about, but something you have to do if you’re going to be honest. In my experience, I started in the National Hockey League in 1983 and I was drafted in 1980, so over all those years, not every relationship is going to be rosy,” Hrudey said. “So some of that was difficult. I shared a couple of things that my family didn’t even know. When you’re willing to be that open and that honest, it’s a pretty emotional experience.” 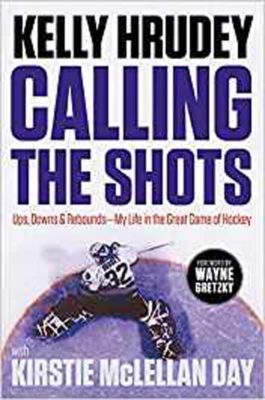 One period of Hrudey’s life that holds a particular resonance for him was the time he spent playing and living on Long Island as a newlywed alongside his high school sweetheart Donna, who he’s been married to for more than three decades. For the former second-round draft pick, it was a combination of the team he landed with and how much they loved where they lived in Sea Cliff, Huntington and East Northport.

“Some of the other things that I wanted to share with people in this book is how grateful I was to start with the New York Islanders and all those great players and incredible staff—Bill Torrey and Al Arbour, in particular. I rave about Al many, many times. I had a beautiful dad and Al kind of reminded me of my father and that was important for me to share as well,” he recalled. “Off the ice, we really learned to love what Long Island provides, and New York City by the way. Because we were younger, we’d go in to New York City quite a bit. But it was a big lifestyle change—both of us were coming from Western Canada and just to see how large the population was and getting used to the Long Island roads and traffic. Then, just from a team standpoint, the importance of the franchise and the respect you had for that franchise and all the players and managers that were before you. I think that was so key in shaping me. I’m so grateful that I was lucky to be on the Islanders and not some other team that didn’t have the same sort of winning attitude that they had. It was really cool to be around all those great players and the respect they had for each other and the game.”

And while Hrudey’s best memories as a player (the 1987 Easter Epic) and broadcaster (getting behind the mic as a player for Hockey Night in Canada during the 1995 playoffs) rank high, it was his work as a mental health advocate that has provided him with the most satisfaction. It all arose from his daughter being diagnosed with OCD and anxiety when she was 12 and the Hrudey family deciding to go public with her diagnosis shortly thereafter.

“The one thing I want to clarify is that when you break your wrist, you go to the doctor and in six or eight weeks, you’re well again. That’s unlike mental health—that’s a lifelong sentence,” he explained. “This has been the best work I’ve ever done in my life and it far exceeds any accomplishment that I’ve had in the game of hockey or in broadcasting. Every single day, people reach out to us, whether it’s through meeting them in a coffee shop, in an email, through a text, a phone call or a conversation like this.”