Benza’s Memoir Is A Long Island That ’70s Show

Someone asked me, what is your favorite piece of art? The first image that emerged were paintings by Edward Hopper. You might know him...
Read more
Andrew Malekoff - Parenthood Plus

I Never Knew My Grandmothers

I have clear memories of my grandfathers. Grandpa Harry, a Polish immigrant, operated a bar-and-grill. I have reason to believe he was involved in bootlegging...
Read more
Columns

Transit agencies across the nation continue to lobby for a second round of $12 billion in CARE COVID-19 funding. Hopes are growing that under...
Read more
Columns

Future Electrification Of The LIRR Port Jefferson Branch Is Decades...

If the MTA, on behalf of the LIRR, will not progress a planning study to look into the feasibility of extending electrification from Huntington...
Read more
TOP STORIES 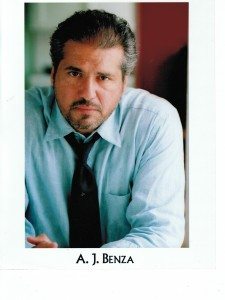 The Simpsons had an episode in which Marge was unable to convince Homer that Homer’s friend, John, is gay. “He prefers the company of men!” Marge shouted, in exasperation. Homer’s response: “Who doesn’t?”

The line might get a laugh from a 21st-century audience but, in an Italian-American household in the 1970s, a 10-year-old boy who requested that a Liza Minnelli album be played and tore the pictures of men out of Playboy magazine’s advertisements, surely raised eyebrows among adults.

A.J. Benza’s critically-acclaimed memoir,’74 and Sunny (Gallery Books), is set in the summer of 1974, when a 12-year-old Benza, and his parents, Al and Lilly, took into their West Islip home one of Al’s nephews, the aforementioned 10-year-old, who lived during the school year with his family in New Jersey. The New Jersey Benzas seemingly believed intense exposure to the raucous Benza clan of Long Island, coupled with an immersion into endless outdoor activities, would change their 10-year-old son’s behavior.

Benza, a former New York Daily News gossip columnist and E! Channel television host spoke about, and signed, ‘74 and Sunny, at the Book Revue located at 313 New York Ave. in Huntington on Aug. 26.

“Everybody I loved the most in my life was at the top of their game,” in the summer of 1974, Benza told me, in an interview this month. Al, A.J.’s father, managed Kaufman Carpets in Bay Shore after retiring from a law enforcement position. Lilly, A.J.’s mother, was a homemaker who worked as a cafeteria aide at a local public school.

Benza’s father had mellowed by the time A.J. turned 12, his son believes. “I think he took his foot off the brake when it came to discipline,” Benza stated. Perhaps it was because A.J.’s two sisters, Rosalie and Lorraine, marked their 29th and 24th birthdays, respectively, in 1974. 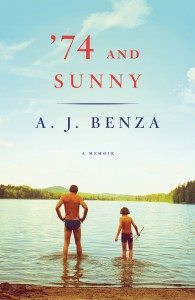 Nonetheless, Benza’s father had his enduring passions, remaining throughout his life an avid fisherman and boater who refused to use pesticides because he saw his lawn as a prospective source of food.

Al Benza was 61 when he died in 1985. Meanwhile, Lilly Benza was
68 when she passed away in 1990. Both were Brooklyn natives who made the audacious move to western Suffolk County in the mid-1960s. ’74 and Sunny’s best anecdote, in my view, comes when Al offers a strident defense of his nephew after would-be neighborhood toughs write in chalk a misspelled gay slur on the Benza’s front sidewalk. Al’s response—a form of street justice, in his son’s telling—kept anyone else from bothering his brother’s son for the rest of the summer. Indeed, ’74 and Sunny is filled with scenes which lend themselves to a film adaptation.

“I’ve taken meetings with several producers who are very interested,” in doing just that, Benza said, adding, “All I care about is the people I love the most getting immortalized.  You can now go to the library and  see a story about the Benzas  in 1974.”

The Benzas in 2015 include A.J. and his wife, Lola. They reside in Burbank, CA with their 11-year-old daughter, Roxy, and 7-year-old son, Rocco. In addition to serving as the producer of an upcoming film, So B. It, based on Sarah Weeks’ novel of the same name, Benza is returning to television later this year.

Starting in October, Benza will begin taping Super High Rollers, a Las Vegas-based poker program, along with Gabe Kaplan, best known for starring in TV’s Welcome Back, Kotter, another production which hit its stride in the 1970s. It will air on an NBC cable network.

Mike Barry, vice president of media  relations for an insurance industry trade group, has worked in government and journalism. He can be reached at mfbarry@optonline.net.