Bem-Vindo A Portugal! Visiting Lisbon And Beyond

For a long time, Portugal was Europe’s best-kept secret. No longer under the radar, it has arrived as one of the top locations to visit. Portugal boasts miles of dramatic coastline for sun-seekers to enjoy, superior dining, baked goods, wine and coffee to satisfy foodies and many fascinating historical cities and monuments for history lovers to experience. The small country on the Iberian Peninsula also hosts all kinds of music and art festivals and has an exciting nightlife.

As you plan your next vacation to Portugal, be sure to add these vibrant places to your itinerary.

Portugal’s capital city is a great place to start your European adventure. Between the quaint streetcars and lookalike Golden Gate Bridge, the hilly, coastal city feels a bit like San Francisco with a Mediterranean flavor. The trams in Lisbon make it easy to get around the city.

As the second oldest city in Europe (after Athens), Lisbon is home to many historical buildings, including Belém Tower, Jerónimos Monastery, Castelo de São Jorge and Praça do Comércio. Belém Tower, or Torre de Belém, is an architectural jewel from the early 1500s that sits on the bank of the Tagus River. The UNESCO World Heritage Site is open to visitors daily and offers private tours when booked in advance.

Lisbon is famous for its intricate cobblestone patterns. The wavy cobblestone pavement and compass design beneath the Padrão dos Descobrimentos is a work of art, and together with the monument, is dedicated to Henry the Navigator, a 15th-century Portuguese prince who made many maritime discoveries.

São Jorge Castle played an important part in Lisbon history and is a must-see for any visitor. Parts of the castle date back to the 1st century and tour guides are happy to take you through one of Lisbon’s most emblematic landmarks and explain the impact it had on Portuguese heritage. From atop the fortress, you’ll get a wonderful view of terracotta rooftops as far as the eye can see. 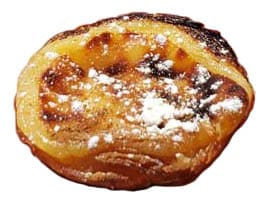 While you explore every corner of the city, make time to stop at Pastéis de Belém, a large bakery that churns out 22,000 pastéis de Belém every day. These world-famous Portuguese custard tarts are made with creamy egg yolks, caramelized and dusted with cinnamon and powdered sugar. Similar pastries known as pastéis de nata can be found at any bakery, but the authentic originals can only be found at Pastéis de Belém, which in 1837 began following an ancient recipe that is kept secret till this day. Pro tip: If the takeaway line is too long, go inside and ask for table service.

The delightful resort town of Sintra is located in the foothills of the Sintra Mountains, not far from Lisbon—making it the perfect day trip from the capital city. The Palacio Nacional da Pena exemplifies 19th-century Romanticism as applied to architecture. Vivid reds and yellows are visible from every part of the lush Parque de Pena forest that surrounds the palace. The grounds feature hidden pathways, ornamental gardens and mythical gargoyles that make you feel like you’re in a fairy tale.

The rest of picturesque Sintra is famed for its medieval castles, historic villas, luxury estates and Michelin star restaurants.

Encircled by a fortified wall, Óbidos is an excellent example of a medieval town, with narrow cobbled streets, lively market squares, traditional painted houses and a well-preserved castle with its origins in antiquity. Óbidos highlights its medieval ancestry with a festival each July featuring heraldic flags, jugglers, jesters, jousting knights, merchant stalls and grilled meats on offer at every tavern.

Ginja d’Obidos is a local delicacy of the region. The sweet cherry liqueur is served in chocolate cups and can be sampled all around town. Óbidos is also a literary haven with a dozen bookshops within the city limits, including one converted 12th-century church. Book lovers can spend hours browsing the shelves for first editions, new releases and everything in between.

Located on the Alentejo coast of Portugal, this tiny fishing village is a hidden gem. A massive earthquake and resulting fire and tsunami destroyed Porto Côvo in 1755. It was rebuilt by the Marquês de Pombal shortly after and now the village is characterized by pretty white houses with blue stripes and bright red doors. At the shore, natural cliffs tower over fine sand beaches and deep blue waters of the Atlantic. Even when the summer draws an endless number of vacationers, secluded coves can be discovered. Visit Porto Côvo to admire the beautiful scenery and luxuriate in a little piece of paradise.