Evy Poumpouras, a former Secret Service Special Agent, co-host of Bravo’s television series Spy Games and author of a newly released book, Becoming Bulletproof has recently been dedicating her time to giving back to those men and women who put on their hospital scrubs or a police uniforms everyday despite the dangers posed by the recent coronavirus pandemic.

After the wake of coronavirus hit New York, Poumpouras decided she needed to find a way to give back to those on the frontlines. Poumpouras, who also has a background in law enforcement, decided to dedicate her efforts specifically to giving back to police officers.

“We go out to precinct, after precinct, and [say] ‘Guys, thank you so much for everything you do. Here are your donuts. Here is your Kombucha. We appreciate you,’” Poumpouras said. “That causes a shift in people’s psyche. That makes them work harder, because when they know that people care it gives them the fuel to wake up the next day and be like, ‘I’m appreciated.’”

Shortly after the partnership began, hospitals reached out to Poumpouras to ask if she would consider expanding her deliveries to include hospital workers as well and she gladly accepted. Since the partnership began, Poumpouras has delivered approximately 6,000 donuts, 200 gallons of coffee and hundreds of cases of Health-Ade Kombucha to many police precincts and hospitals in the area including Long Island Jewish, Mount Sinai Morning Side NYC and Lawrence hospital in the Bronx.

“It is amazing what showing up with donuts and coffee will do to people’s morale,” Poumpouras said. “It sends them a message—you’re important, we’re here and we appreciate you.”

When Poumpouras first began donating coffee, donuts and kombucha she used her own vehicle to make the deliveries. But as the requests for donations continued to grow, Poumpouras began to run out of room in her vehicle to transport everything. Chevrolet graciously donated one of their Chevy Trailblazers to the cause.

“[Chevrolet] stepped up,” Poumpouras said. “They gave me an SUV. They were like, ‘here you go however we can help.’ You’re seeing everybody want to do their part to help in any way they can.”

During her time as Secret Service Special agent, Poumpouras worked in the criminal investigative division, often working on complex criminal investigations for both violent and financial crimes. She described the most gratifying and powerful experience of her career as being able to give back to others in the form of justice and resolution.

Having served under former presidents Barack Obama, George W. Bush, Bill Clinton and George H.W. Bush as a Secret Service Special Agent taught Poumpouras many life skills, which she talks about in her rbook Becoming Bulletproof, which hit bookstores and online retailers on April 21. In her book, Poumpouras talks about the lessons she learned from protecting presidents, as well insights and skills from the oldest and most elite security force in the world. Becoming Bulletproof will help readers prepare for stressful situations, instantly read people, influence how they are perceived and live a more fearless life. 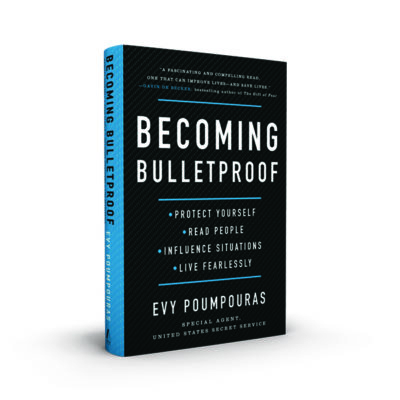 “This book is like 20 years in the making in my head,” Poumpouras said. “It’s everything I learned. But I also wanted to make sure I put my failures in there because I’ve learned more from my failures than my successes. Sometimes you read these great books from former tactical special forces people or other people and you’re like, ‘That’s great, but you’re this special person and this doesn’t apply to me.’”

Poumpouras stressed the importance of writing a book that would appeal to the average person.

“I’m like you,” Poumpouras said. “I grew up in Queens. Nobody in my family went to college. But I figured it out and I’m no different than you are. This is for the average person—to help them in during this time.”

Although there were some concerns about launching the book during this pandemic, Poumpouras feels the book will help people find comfort in themselves especially during this time.

“I wrote this book to help people, Poumpouras said. “I didn’t write it so I could see it in a store on a shelf. I didn’t write it so it could be on a bestseller list, although that’s a great thing. I wrote it to be of service to people, everything else is secondary.”

Becoming Bulletproof retails for $24 and is available for purchase on Amazon, Google Play, Barnes & Noble, Audible.com and Simon & Schuster.