To help kick off the 2016 baseball season, the Bob Feller Act of Valor Award’s Walk of Heroes exhibit has recently opened at the Cradle of Aviation Museum. 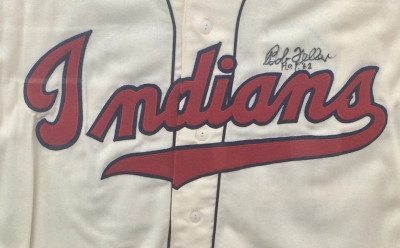 The Bob Feller Act of Valor Award exhibit features a series of informative banners that honor the service of the 37 Baseball Hall of Famers who served the nation during World War II.

Hall of Famers like Yogi Berra, Ted Williams, Jackie Robinson, Hank Greenberg and Bob Feller, to name a few, highlight this special exhibit that is designed to educate the youth of today about lessons of citizenship, service to one’s country and sacrifice in times of great national need.

At the start of this country’s involvement in World War II, baseball players from around the country put down their bats and balls and immediately enlisted in service to their country. Many players were in the prime of their major league career and sacrificed many of their best years for the war effort. The exhibit is designed to highlight the sacrifices made by some of baseball’s greatest players as an example to be followed by future generations.

The exhibit runs through May 15 and is free with museum admission. As a special offer, Little Leaguers in uniform will receive free admission. In addition to the collection of banners, the exhibit also features a selection of artifacts and memorabilia, including stadium seats from several venues.

The Cradle of Aviation Museum is located on Museum Row on Charles Lindbergh Blvd. in Garden City. The museum is open 9:30 a.m. to 5 p.m., Tuesday through Sunday. Special hours on Monday, April 25, for spring recess. Visit www.cradleofaviation.org or call 516-572-4111.