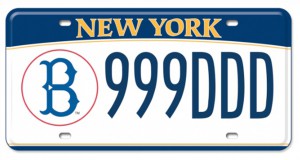 With spring training underway and the start of the 2015 baseball season fast approaching, the New York State Department of Motor Vehicles (DMV) encouraged the state’s sports fans to show their support for New York’s baseball teams with a custom license plate from the DMV.

“New York is the proud home of two of the most well-known sports franchises in the world, the New York Mets and the New York Yankees,” said DMV Executive Deputy Commissioner J. David Sampson. “An innovative way to show your support for one of these teams, or the Brooklyn Dodgers and Atlantic League Long Island Ducks, is with a custom plate. A Major League Baseball-approved license plate tells the thousands of baseball fans who vacation in New York each summer, as well as local sports fans, who you root for each season.”

All four teams have celebrated championships throughout their existence. The Brooklyn Dodgers, who broke the color barrier in baseball by signing Hall of Fame player Jackie Robinson in 1947, captured the pennant in 1955. The Bethpage-based Long Island Ducks won Atlantic League Championships in 2004, 2012 and 2013. ‘The Amazin’ Mets,’ who play at CitiField in Queens won World Series Championships in 1969 and 1986. Rounding out the group is, without question, the most dominant baseball team in history with a staggering 27 World Series Championships—the New York Yankees.

The DMV began offering the Mets and Yankees plates in 1993, and there are more than 1,000 currently active Mets plates on the road today and more than 4,400 Yankees plates on vehicles across the state.
New Yorkers can order a custom plate online at www.dmv.ny.gov or by calling the custom plates unit at 518-402-4838 from 8 a.m. to 4 p.m., Monday through Friday. It takes up to six weeks to receive a custom plate order. Custom plate fees vary if the plate number is assigned by DMV or if a customer chooses to personalize it. For example, the initial fee for an assigned plate is $60 or $91.25 for a personalized plate.

Custom plate images are available by contacting the DMV Communications department at 518-473-7000.