If you ever wondered what the cross-section of traditional Irish music and bluegrass might sound like, look no further than We Banjo 3. For the past eight years, the band, whose ranks are made up of two sets of siblings—Enda and Fergal Scahill and Martin and David Howley—have been marking their mark on the American roots music scene thanks to a sound that combines exquisite musicianship, gorgeous harmonies and a freewheeling spirit that’s gotten them noticed and admired by fellow plucker Steve Martin.

“We Banjo 3…are making waves….here in America,” the actor/comedian said. “They are playing banjo in a style that I didn’t even know could be played like that.”


In addition to banjo, the quartet make a beautiful noise by incorporating fiddle, mandolin, guitar and percussion into a rousing in-concert experience that was expertly captured on the group’s current project, last year’s Roots to Rise Live. It’s a project that frontman/guitarist David Howley is rightfully proud of, particularly with how it represents his group.

“This is a weird thing to say, but I think I prefer our live albums to our studio albums because I think the live albums really capture the band. Whereas the studio album is the more reserved [representation]. It’s almost like we over-think it a little bit,” he said. “The importance of Roots to Rise Live for us is that it is a snapshot of us at a time that is a coming of age for us. It’s an acned, awkward school portrait of our high school graduation. That’s what it is. It’s because we’re not Irish playing bluegrass music and we’re not bluegrassers playing Irish music. We’re a cross-pollination of both genres. We’re kind of what happens when you listen to everything and don’t limit yourself to anything. As a singer, my voice is not great every night. Sometimes it’s scratchy and out of tune. It’s terrifying. Live albums are tough. I get two shots to sing those songs and that is it. Once that’s done, it’s done and I don’t get another shot. So the stress around recording a live album is a lot, but it was so worth it.” 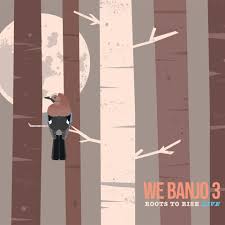 With 2019 in the rear view mirror, Howley and his compatriots are eager to hit the road behind the Rise and Shine Tour given how swimmingly the last year went. Not only did Roots to Rise Live debut at the top of Billboard’s Bluegrass Albums chart, but the group’s last studio effort, 2018’s Haven, re-entered the charts at number 5, making We Banjo 3 the only Irish band to hold two Top 5 chart positions simultaneously.

“We’re very excited about this year. If 2019 was the coming of age of this band, 2020 is the pulling of the sword for this band. We’re more excited about this tour than we have for any other tour. Every band says that about every tour, right? For us, this is different. We’ve gone through an enormous amount of stuff together as a band,” he said. “We supported each other through really hard times. For the first time, we feel like we’ve really centered around that common goal that 2020 is something we’re so excited about. We’ve signed new management and we’ve got a great booking agent. So the business end of the band is great. We’re writing a ton of music. I’m writing two or three songs a week. We’re engaged and ready to meet people. We’re not looking to do the same thing over and over again. That’s never been our goal as a band. I want to show the audience that we’re not just up here playing the same songs and trotting out the same rehearsed lines every night. This is all live.”

The interconnectivity the band has is one Howley feels he shares with the band’s fans. And giving back is a big part of that. So much so that last year, We Banjo 3 raised $7,500 for Mental Health America, the nation’s leading community-based nonprofit dedicated to addressing the needs of those living with mental illness and to promoting the mental health of all Americans. Going into 2020, We Banjo 3 will be partnering with start-up, nonprofit Backline, which works to support the mental health of music industry professionals and their families by providing streamlined access to mental health and wellness services and educational resources specific to the work and lifestyle of the music industry community. Howley, who admits to having struggled with anxiety and depression, feels it’s a big part of We Banjo 3’s purpose.

“We get to see the entire world. We get to see people in their most vulnerable place. What people don’t realize is that when I’m standing on stage and you’re looking at me, I can see you too,” he said with a laugh. “When you say something on stage, you can see the interaction in someone’s eyes. You can see whether that hits home for them. Some of our music is about mental health. Some of it is almost music of immigration. We talk about love, inclusiveness and heartbreak—we talk about all these things in our music. We do it in a very joyful way but also a very real way. We’re all on this same train that is life. We’re all humans and for one of us to survive, we all have to survive.”