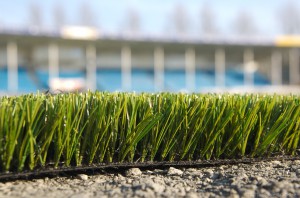 The synthetic turf field boom, from the NFL to local schoolyards and playgrounds, has experts arguing if it’s a safer alternative to natural grass or suggesting serious health risks. The crux of the turf field debate is centered on its infill, with the main substance consisting of recycled tires, known as crumb rubber.

“We’re sending our architects back to the drawing board,” Mineola School District Superintendent Michael Nagler said. Mineola is currently in the planning stages to install a turf field in at one of its schools. “We’ll make a decision that’s best for the students and the district.”

With more than 11,000 turf fields in the United States, officials and doctors are calling for comprehensive analysis into the safety of the infill. A 2009 turf field study from the Environmental Protection Agency (EPA) yielded little results, says one U.S. congressman.

The study asserts crumb rubber poses no threat, but admits more data-gathering is needed because only four playgrounds were tested.

“We now know that the study was outdated and completely inadequate,” Congressman Steve Israel said.
“The EPA should do a comprehensive analysis as to whether these elements are a risk to our children.”

The enhancements of the field are prevalent. The fields need less upkeep, which helps school districts and communities save on maintenance costs. It also creates a more consistent playing field for athletes.

Yet, the number of volatile organic compounds found in crumb rubber resembles that of a grocery list. The EPA study revealed that crumb rubber contains questionable materials, including arsenic, benzene, cobalt, copper, lead, mercury, nickel and benzothiazole among others. 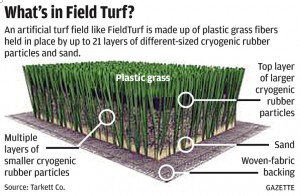 “It includes heavy metals, a bunch of chemicals which are known to be carcinogens,” said Dr. Ken Spaeth, Division Chief of Occupational and Environmental Medicine for the North Shore LIJ Health System. “There’s a group of chemicals that can alter hormonal balances in the body.”

Amityville-based LandTek has handled most of the field turf installations in Nassau school districts, including Plainview-Old Bethpage High School, Island Trees High School and Carle Place High School, and has future plans at four of the five schools in the Sewanhaka Central High School District.

marketing, innovation, customer service of FieldTurf. “All the other products haven’t gotten that much attention yet.”

Aside from crumb rubber, field temperatures on synthetic surfaces are a concern of school districts and healthcare experts. According to Spaeth, the unknown is the possible migration of chemicals from the field into players via the air, called off-gassing.

“Under hot summer days, would you expect more off-gassing than on a cold day? Yes,” Spaeth stated. “How much more? We don’t really know at this point.”

Aside from crumb rubber, turf companies offer alternate infills, including organic materials such as cork or rice flakes. NikeGrind, which is made of recycled sneakers, has slowly been gaining traction as an infill option, experts said.

The drawback with organic materials is the price tag. The Mineola School District was presented with the option, but turf fields with cork infill have a five-year shelf life, as opposed to crumb rubber, which lasts a decade before needing replacement.

“I think there’s a lot of noise in the market being made by different suppliers,” Gill said. “Anything besides crumb rubber gets extremely expensive.”

“The science supports it,” he said. “If you’re looking to reduce heat, the coolfill or organics are best.”

The rising temperatures coupled with the potential toxic compounds of crumb rubber are what have experts leery of its use.

“You have a substance that you know is problematic,” Spaeth said. “It’s not the mere presence that’s a hazard. It’s that under certain conditions, they become a risk for exposure. The science supports it.”

Conflicting studies in New York and Connecticut suggest infill and field temperatures on turf fields are split. Citing a 2002 study at Brigham Young University, a 2007 New York State Health Department document says the average surface temperature on a synthetic turf field was reported to be 117 degrees while temperatures on natural turf and asphalt were
78 and 110 degrees, respectively.

“In the heat that’s generated by hot summer days, those are other concerns,” Spaeth said. “In terms of toxicity, heat will facilitate the release of such chemicals.”

In 2008, the New York City Department of Parks and Recreation released its report on crumb rubber and found elevated amounts of lead in the infill.

“If you look at the surface, I agree it’s hotter,” Gill said. “We’ve spent time in developing products to change that. When it comes down to player safety, there’s no option better.”

However, a study done by Connecticut’s state health department argues that at two and five feet from the surface level on turf fields, the temperature change was minimal at best. Furthermore, crumb rubber exposure posed little threat to player health.

“We found there to be very little exposure of any substances, carcinogenic or not, in the vapors and dust that these fields generate under active use, summer conditions,” the Connecticut study said.

Proponents of turf fields affirm they would never put children in harm’s way. Furthermore, the amount of crumb rubber a player would need to be subjected to outweighs the risk.

“Everything is encapsulated in the rubber itself,” Gill said. “The vulcanization process makes it inert. If your body ingests tire crumb, it can’t extract any of those harmful chemicals from it. If there’s a concern about tires, then we have much bigger concern than turf fields because then any street corner you stand on is the most hazardous place you can be.”

For Israel, his task is to get the EPA to dig deep into the crumb rubber conundrum.