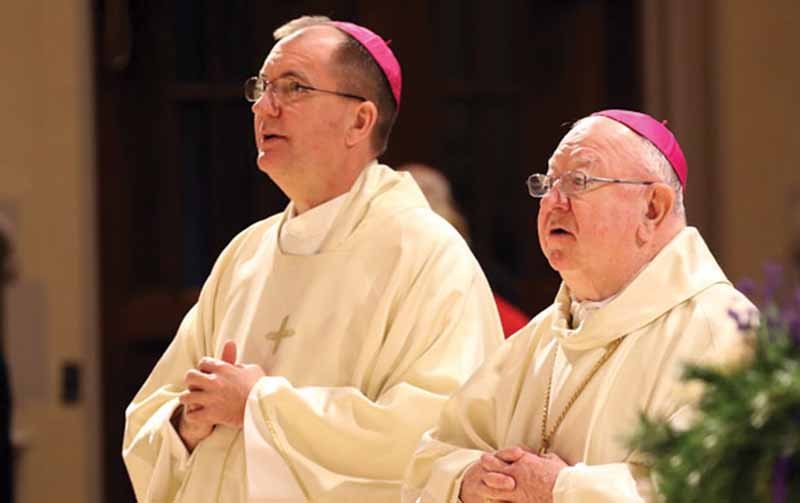 Most Reverend John O. Barres, S.T.D., J.C.L., D.D., 56, pictured left, was appointed by Pope Francis to serve as the fifth Bishop of Rockville Centre. The appointment was made public in Washington, Dec. 9, 2016, by Archbishop Christophe Pierre, apostolic nuncio to the United States. Bishop-designate Barres will assume leadership of the Diocese during a Mass of Installation at the Cathedral of Saint Agnes on Jan. 31, at 2 p.m. Until that time, Bishop Murphy will serve as Apostolic Administrator.

Previously, Barres served as Bishop of the Diocese of Allentown, PA. He succeeds Bishop William Murphy, 76, who has led the Diocese of Rockville Centre since 2001.

“It is my deep conviction that he will be a Bishop for all of us without exception,” said Bishop William Murphy (pictured right). “He has shared with me his love of youth and his care for the elderly. He has a keen sense of parish life and has a special expertise in education. He has a deep love for the poor and will support Catholic Charities, parish outreach as well as Catholic hospitals on Long Island. He will be a good neighbor to our brothers and sisters of the Christian churches, our Jewish and Muslim friends and the many civic and political leaders with whom he will work in building up Long Island for future generations. Above all, he is a man of prayer, both the prayer of the Church through Eucharist and the sacraments as well as the many devotions of our Catholic tradition, especially the Blessed Virgin and St. Agnes,” said Bishop Murphy.

Sal “The Voice” Valentinetti, the finalist from America’s Got Talent, and graduate of Our Lady of Mercy elementary school and Holy Trinity Diocesan High School, has had a big year! Valentinetti, who used to deliver pizzas for a shop in Albertson is best known for his outstanding covers of Frank Sinatra’s “My Way” and “That’s Life.”

In July, Valentinetti was advanced straight to the quarterfinals of America’s Got Talent by Judge Heidi Klum. Since then, Valentinetti has opened for comedians Jay Leno and Joe Piscopo, he sang a duet with Heidi Klum on an AGT Christmas special in December, and sold out all three shows at the Paramount in Huntington where he performed Rat Pack-era standards and delivered personal and funny monologues about his family and about home life here on Long Island. 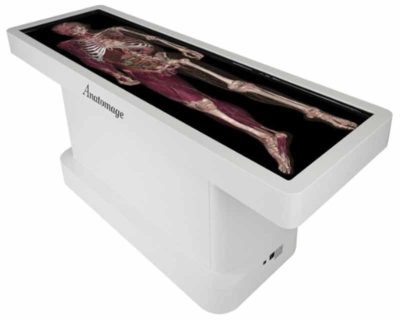 St. Anthony’s High School has become the only high school in the state, and one of only about 20 high schools in the country, to offer a virtual-reality cadaver table as part of its STEM (Science, Technology, Engineering and Math) program. The 3-D virtual cadaver table provides a three-dimensional experience in looking at and cutting into a cadaver.

Brother Gary Cregan, principal at St. Anthony’s, is using colleges as his model for upgrading STEM education. The new cadaver table is part of the school’s science research program which includes a molecular biology lab where students will do DNA work. St. Anthony’s is not alone in their quest for superior STEM capabilities; Holy Trinity High School in Hicksville has built a small home on campus that uses solar energy and is a test bed for advanced energy technologies.

Chaminade High School is building a new 36,000 square foot, state-of-the-art science, technology and engineering building slated for opening in 2017, and St. Dominic’s High School in Oyster Bay has established a partnership with the DNA Learning Center at Cold Spring Harbor Laboratory in its multi-million dollar STEM center that was opened in 2012. 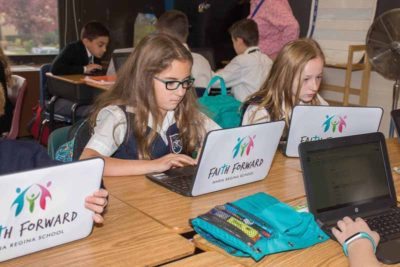 A Wave Of New Chromebooks Arrive In The Schools

The new Chromebooks join a rich technology environment in the schools which already are Wi-Fi enabled, utilize interactive whiteboards in classrooms, have Windows and Mac computer labs, and provide iPads and Chromebooks for students. 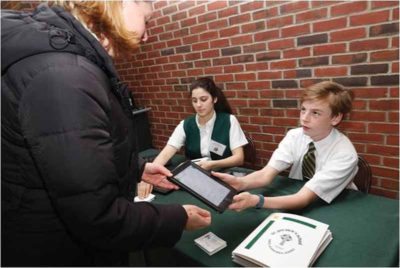 In news announced in January on the Telecare Telethon, Lewis Ranieri, chairman and founder of the Tomorrow’s Hope Foundation, announced that the foundation would be supplying approximately 30 new iPads a month to schools in the diocese.

The program is slated to run for two years. The Tomorrow’s Hope Foundation is a charitable organization that solicits donations from businesses and individuals on Long Island to support elementary school students and schools in the Diocese of Rockville Centre. The primary mission of Tomorrow’s Hope is to provide scholarships and grants to families who would like to give their children a quality Catholic education, but need a little financial assistance to make that a reality. 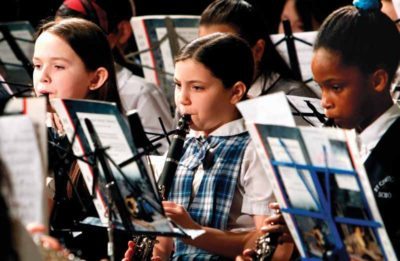 With the various Christmas concerts and shows behind them, musicians from across the Diocese are beginning to think of participating in the 2017 Catholic Schools Honor Band concerts which will be held on March 4.

The concerts, offered as an afternoon and evening show to accommodate all of the musicians qualified to participate, will again be held in the auditorium at St Anthony’s High School. Students who are identified by their school band directors as top band students are given the opportunity to come together for a unique and enriching musical experience. Honor Band is a chance for enthusiastic, motivated, and talented band students to perform with other top musicians from the region.

It is a completely wireless space, allowing students full access to Wi-Fi. With an abundance of new and improved resources, students can work collaboratively, pursue academic interests and learn how to conduct college level research projects. St. John’s has partnered with the library science department and interns from St. John’s University in order to learn and integrate coding and metadata analysis, web design and information technology. The new media center allows teachers and students to operate in large gatherings, small groups, or one-on-one instruction.

A new series of meetings is being hosted by Superintendent Dr. Kathleen Walsh to increase the opportunities for parents to directly hear from and interact with her and her team from the Department of Education. The meetings, called Making Connections, are being held monthly on Saturday mornings in the Department of Education building at 128 Cherry Ln. in Hicksville. “We have had a number of very productive meetings to-date.” Said Dr. Walsh.

“Parents have always been an important part of the success of our students, now the parents who are nice enough to give of their time at these meetings are able to have a greater voice in overall direction and success of all of the schools.” Parents of current students who want to participate may contact the office at the Department of Education at 516-280-2963 for the upcoming meeting schedule.