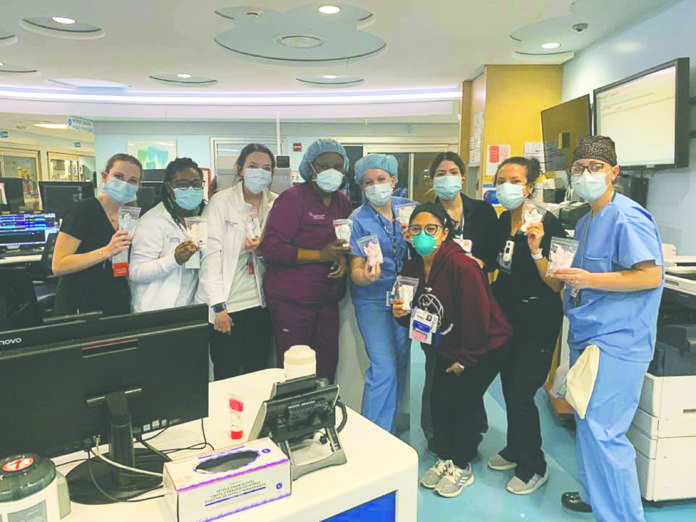 With health care workers rightfully front and center during the current pandemic, local small business owner Catherine Camisa wanted to do something to show her appreciation for the risks they’ve been taking day in and day out. The owner of Massapequa’s Mom’s Ceramics Studio, a full-service old-time greenware ceramic studio, Camisa has started up the Angels Wear Scrubs Project, which sends ceramic angels out to hospitals free of charge. With the mother of five’s shop closed down in accordance with Governor Andrew Cuomo’s mandate that all non-essential businesses remain shuttered, the Massapequa Park resident was sitting around with her friend Donna Sgambati at the shop talking about the latter’s daughter, who works at South Nassau Hospital.

“Donna has a daughter who is a speech pathologist at South Nassau Hospital who is usually working with her speech therapy patients,” Camisa said. “But since this whole thing started with COVID-19, they put her in the emergency room. We were talking about how hard Nicole is working, how she’s being exposed to this virus and how crazy all of this is. I really wanted to make something for her and her crew that is working in the emergency room to let them know we really appreciate them. I do feel terrible that they’re basically putting their lives on the line for us.”

Camisa had one mold and decided to make these cherubs with the notion that not all angels wear wings, some wear scrubs. Deciding to make 100 angels for all the staff on the night and day shifts over at South Nassau, going with a mold that only allowed her to make three statuettes at a time meant she was going to have to acquire more molds given that she’d only be able to create six to nine angels a day.

“I called the mold company that I use and explained that I was going to do this and would like to order three more molds and wanted to get them as fast as possible,” she recalled. “I didn’t mind paying for the extra shipping because it was important to me get these things done fast and out to them as soon as possible. Once I told the mold company what I was going to do, they not only overnighted them to me, but they gave them to me for free, which was amazing. I was crying, they were crying, we were all crying. Then they got here, we made them and made up little baggies for them and we sent them in.”

Kicking off with an initial batch of 111 on April 17, Camisa sent one to every nurse at South Nassau Hospital. After posting photos to her Facebook page of appreciative health care workers posing with their newly acquired gifts, demand for the Astoria native’s figurines exploded. Requests started pouring in from hospitals around the country. As of press time, close to 2,000 angels have been created and sent out to medical facilities in California, Virginia, Rhode Island, Arizona, South Carolina and Wisconsin. Locally, Camisa has added Mercy Hospital, Huntington Hospital and St. Vincent’s to her list. An administrator over at Long Island Jewish in New Hyde Park bought her 10 molds to fulfill a 1,000-strong order that would go to medical and support staff, including people in the mailroom, secretaries and custodians.

Mom’s Ceramics has been in existence since 2008. Having suddenly lost her father the year before, Camisa’s son bought the business in the hopes of rousting his mother out of her deep depression. As an alumnus of Manhattan’s High School of Art and Design (“I was always that nerdy kid that did art instead of hanging out”), ceramics was a first love for Camisa. Her son’s strategy worked and while the business moved to its current Massapequa location after getting its start in East Meadow, Camisa has been happily leading ceramics-making classes, putting together kids party packages and hosting other fund-raising events. And while business has ground down to a halt, the grandmother of three is putting in 10 to 15 hours daily and has honed down the normal two-to-three day turnaround time down to a single day. It’s a task she gladly embraces.

“I’ve always had an affinity for nurses,” she said. “I get a lot of nurses in here as customers and I always ask them how they don’t take it home and how do they go back to normal life after dealing with so much drama. I think they’re the heroes of the world and I wanted to do something to thank them for sacrificing their time and lives for us.”

Mom’s Ceramics Studio is located at 944 N. Broadway in Massapequa. For more information, visitwww.momsceramics.net or call 516-233-8884.