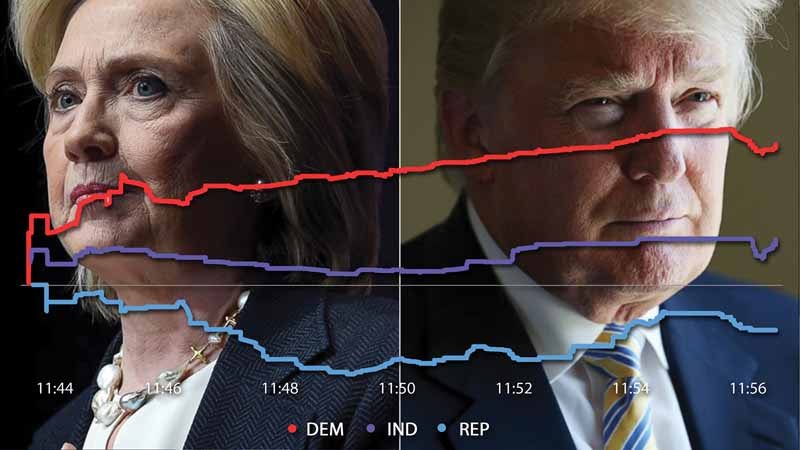 A new app just hit the market that might change election polling forever. Hofstra graduate and Farmingdale resident Jim Sabellico, president of J. Louis Technology, recently launched a free mobile app, called POLLitiks, that monitors real-time opinion for the presidential candidates’ speeches and upcoming debates. With the first debate taking place at Hofstra University on Sept. 26, this app will allow Long Islanders, and the nation, to share their opinions with the world.

It is impossible to turn on the news these days and not see coverage of the race for the presidency. The media relies on opinion polls to project the potential winner at any given moment in time. Sabellico took notice of the constant stream of these polls and was struck with a thought—how representative are they really of the average person’s opinion?

“Those polls are largely composed of a ‘random sampling’ of people who may or may not actually represent you and what’s important to you and your family,” Sabellico said.

Furthermore, he believes the polls to be quite general and “gloss over some pretty important things, such as the real details of what the candidates stand for,” Sabellico said, “They only measure one general question at a static point in time, usually well after a speech or debate occurs.”

After some thought on the matter, Sabellico had what he calls a crazy idea. “What if there were a platform where everyone could weigh in with their own personal opinion, in real time, on the individual items that matter to them,” he said, “and show these politicians what America really thinks of what they stand for—using actual cold, hard numbers.”

POLLitiks accomplishes just that. The app captures the true pulse of the people down to the smallest detail.

“This is not just about who we will vote for on Election Day,” Sabellico said. “It’s about the individual ideas and policies the candidates are promoting and what we the people want for our country.”

Sabellico and his team, consisting of his wife Casandra K. Sabellico and Harry Adelman, worked day and night to bring the idea to fruition. Only two days after its release, 489 users shared their opinions about a televised speech by Donald Trump.

The app allows users to identify themselves as Democrat, Republican or Independent and specify if their reaction to the current talking point is positive, neutral or negative, on a sliding scale. The data is combined and translated into a graph for users, media entities and politicians alike to gauge feedback of a speech down to the second.

Information like this is valuable. Television network executives rely on similar continuous streams of data shared by research panelists to fine-tune scripted programming. In the way that viewers can be part of CBS’s decision-making process, users of POLLitiks can influence government policy-making.

POLLitiks is currently in phase one, having a simple interface and functionality. Phase two will include social sharing, embedded live streaming of video in the app and advanced analytics, all to be rolled out over the next few weeks.

Phase three will allow users to add their own events. For example, a local village can host an event and invite people to use the app via a special link—kind of like a webinar, with instantaneous feedback—thus making the app relevant beyond the presidential election this November.

Sabellico suggests the app can be employed during a State of the Union address or any press conference.

“I see the results being relevant on a national level,” he said. “There has never been any method for people nationwide to weigh in on their feedback. Politicians live and die by their poll numbers, so I believe campaigns in particular would find it interesting to watch during an event.”

Sabellico pointed out that previously, the main outlet for people to express their political opinions is on Facebook, but there has been no quantitative measure of these posts.
Sabellico said, “Like any great social effort, in order for this to work, we need people to know about it and we need people to use it.”

He continued, “Americans near and far can use this app to share their feelings, pro or con, so the candidates get a clear understanding of what America wants and what America deserves.”

POLLitiks is available on iOS and Android platforms. For more information and to follow along with the data, visit www.pollitiks.com.

J. Louis Technology, based in Farmingdale, has developed several other apps, including Toothy, Foundistry and Whisperwake. Learn more at www.jlouis.com.