Amanda Shires: Motherhood And My Piece Of Land 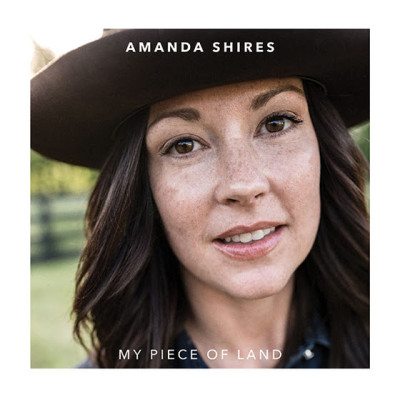 When Amanda Shires was in her last trimester, there were plenty of things she was doing once she came off the road due to her advanced state of pregnancy. Going to OB-Gyn appointments, getting the baby’s nursery ready, cleaning the garage and finally, recording My Piece of Land, her latest album. Clocking in tightly at just over a half hour, this collection of songs was overseen by producer Dave Cobb (Sturgill Simpson, Chris Stapleton) and revolves around the concept of home. It was a place she tapped into that was not only informed by her experience as the offspring of divorced parents, but as a mother-to-be.
“I’d gotten to a place where I’d done everything and was having to face what I was doing—bringing a child into the world and all the excitement and doubts that come with [wondering] if I can be a good parent or a good mother,” Shires explained. “I started writing and I got about three or four songs in and when I did that, I decided to bring Dave Cobb in and asked if we could record. He said yes and we started recording a couple of weeks later. I finished recording it and then I had my baby.”

Shires doesn’t shy away from exploring both the scary and soothing corners of her psyche. You can hear the anxiety bubbling up through “Slippin’,” when she sings, “There’ll be a trigger, then up starts the fire, a handful of matches some faulty wiring/You’ll say you have this hollow feeling/Something’s always been missing/Tonight could be the night you go slippin’ away from me.” Whereas with “You Are My Home,” she thanks someone who helped define her place in the world, which in this case, could very well be fellow singer-songwriter/husband Jason Isbell. And while the approach toward recording may have been the same for Shires as when she’s worked on prior solo projects, the major life game-changer that is becoming a parent was never far away from informing these songs.

“Bringing a child into the world is a serious thing and I had something more to say. It’s not just bringing her into the world and all the wonderfulness. It’s about having to come to terms with my new identity as a mother and think about how marriage works and hopefully it will work,” she said. “In some ways, the record was proving to myself that I could still have my career and follow my passion and also be a mom.”
Chalk it up to another part of growing up, which Shires was forced to do early on when her folks split and wound up living around four hours apart—he mom in Lubbock, TX and her dad in Mineral Wells, another tiny Texas burg. And while she grew up poor, Shires wound up getting a fiddle when she was 10 after she asked her pop to buy it for her at a local pawn shop, where he was looking to purchase a hunting knife. Despite a paucity of funds, he agreed, only if she promised to practice and play it. Five years later, she was playing a latter-day line-up of Bob Wills’ Texas Playboys. It was a musical education that she looks back at in amazement.

“Tommy Allsup, who was also in Buddy Holly’s band, is an amazing guitar player and the bandleader of the Playboys. I think [my situation] was somewhat luck and somewhat being good at it. I was willing to play the least fun part in the three-part harmony and my gear always worked. I was very directable and young. You do what you’re told when you’re young,” she said. “It’s not like a lot of your colleagues when you tell them to do something—either they don’t want to do it or have their own motivations. I started playing with them and I didn’t realize how cool it was until I started really learning the music and loving it. I didn’t realize that it had such a historical significance in music until much later. I feel very lucky that I was in the right place at the right time.”

Shires would later wind up recording and touring with a number of other artists including Chris Isaak, Justin Townes Earle, Todd Snider and Jason Isbell & the 400 Unit. She also wound up playing a musician in the 2011 Gwyneth Paltrow vehicle Country Strong and even found time to enroll in the Master of Fine Arts program at Sewanee: University of the South. Inspired by the likes of poets Billy Collins, Elizabeth Bishop and Mary Oliver, Shires was eager to get more proficient as a composer in terms of precision and editing. She’s found the coursework to be helpful, but completing her thesis will have to wait until the spring. For now, Shires will be going on the road in a van while daughter Mercy will be going on the road with her daddy on his tour bus. It’s a scenario that the new mom is still trying to wrap her head around.

“I’m going to be leaving her quite a bit, which is quite terrifying. She’s going on the road with Jason, because he tours in a bus and it’s more comfortable,” Shires said. “I still tour in a 15-passenger van. No amount of good parenting can make up for an unhappy child. As for my thesis. I’m halfway through but hopefully I’ll be done with that in the spring. I thought that I could do it while Mercy was just born because I figured I’d be home doing nothing.”