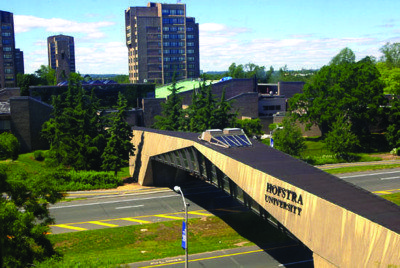 Nassau County Executive Edward P. Mangano and Acting Police Commissioner Thomas C. Krumpter held a press conference today to discuss security for the upcoming 2016 Presidential Debate which will take place Monday, Sept. 26, at Hofstra University. Monday’s debate is the first of three presidential debates. Recent terror attacks in New York and New Jersey have our police officials on heightened alert. To that end, there will be numerous road closures and prohibited items for the debate.

“The Nassau County Police Department does an outstanding job protecting and serving the people of Nassau County,” said County Executive Mangano. “With the recent terror attacks in Manhattan and New Jersey, and unprecedented times around the globe, large scale events such as this Presidential Debate require significant police resources. I thank our partners in law enforcement and call on the public to help serve as our eyes and ears. If you see something out of the ordinar—a suspicious individual, backpack or bag, dial 911. Additionally, if you read something on social media that raises concern, Text-Tip via the Nassau County CrimeStoppers mobile app.”

Below is a list of “prohibited items” for anyone entering secure zones around Hofstra University. Please note that pedestrians entering these secure zones are subject to search.

In addition, Nassau County Police Department reserves the right to prohibit any other items that are determined to be a potential public safety hazard.

In an abundance of caution, traffic surrounding Hofstra University will be severely affected. Below are some road closures. 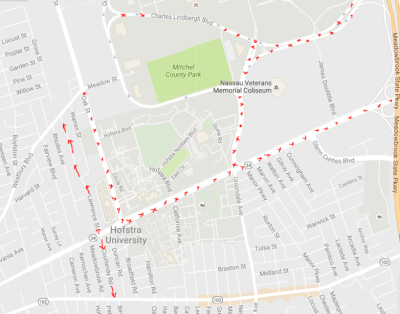 The Nassau County Police Department is advising that citizens avail themselves of alternate routes and should avoid travel in the area of the Nassau Coliseum and Hofstra University on the day of the debate.

At 4:45 p.m., a march will take place from 540 Fulton Ave., Hempstead, to the Hofstra University public demonstration space. The march is likely to impede traffic in that area as well as the roads listed above.

Alternate routes will be available to residents traveling to the Health and Human Services Building, at 60 Charles Lindbergh Boulevard in Uniondale, on Monday, Sept. 26, due to the security preparations being taken for Monday’s Presidential debate at Hofstra University. This facility, which will be open during normal business hours on Monday, houses the County’s Department of Social Services, Office of the Physically Challenged, Youth Board, Office of the Aging, Health Department (Early Intervention) and the Department of Mental Health, Chemical Dependency and Developmental Disabilities.

For residents traveling to 60 Charles Lindbergh Boulevard by bus, services will be affected on the following routes: N70/71/72, N35, N16, N6X (to NCC), N43, N51, N45, N27, N24 (to East Meadow). We do not yet know the exact detours these bus routes will take, but residents should expect delayed bus service to and from Health and Human Services.