A Tree for All Seasons 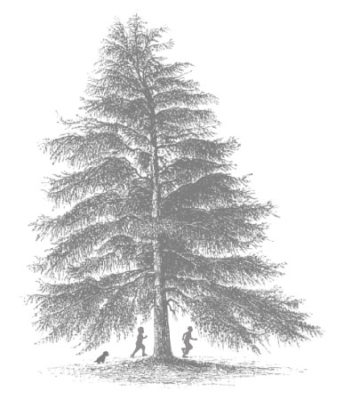 In a four-year span during the mid- to late-1990s, my now-grown children lost three of their grandparents and their dog. My boys were 10 and six when my father died in 1994. Three years later there were three more losses. My mom died in 1997. A little more than one year later my father-in-law and dog Kirby, a cairn terrier, died on the same day in August 1998. My wife and I were in Quebec City at a music festival, at the time, on our first extended vacation away from our children when we received the news in two heartbreaking telephone calls just six hours apart.

As a mental health professional who has spent time with bereaved children and adults over many years, I had extensive knowledge about how children process death at different ages. Over the years I developed good skills in listening and gently encouraging the expression of feelings through talk and play. But I also knew that addressing the death of strangers was not the same thing as coping with one’s own losses.

Like so much that I have struggled with as a parent, I knew I had to put my credentials aside and simply do the best I could to support my family and take care of myself, as I was bereaved as well.

Soon thereafter my family and I experienced another death—this time with an impact I had not expected and effects that linger to this day. In our yard was an old pine tree that had to be felled after it contracted a disease. None of the tree “experts” that I employed could bring it back to health.

It was a splendid tree of great character, oddly shaped, home to a squirrel’s nest and countless birds, and with branches sitting low enough for swinging and climbing. Its trunk was thick enough to run around to evade contact during games of tag. It was free enough of branches in one high spot to support a backboard and hoop.

It wasn’t easy to dribble on the grass but it was just perfect for endless games of H-O-R-S-E. On the warmest summer days its shade offered respite from the oppressive sun. Each fall I was left with the unpleasant task of raking pine needles. But our tree also bore pine cones that I threw into the winter fireplace for extra snap, crackle and pop that rivaled Rice Krispies.

It was our family tree, a tree for all seasons.

Today, when I look outside or sit in the yard I am flooded with memories of my old friend and the times we had together. We’ve planted a few new trees around the perimeter of the yard in the intervening years, but the hole in the center remains.

Henry David Thoreau wrote, “I frequently tramped eight or ten miles through the deepest snow to keep an appointment with a beech-tree, or a yellow birch, or an old acquaintance among the pines.”

Life is full of surprises, and it came as a surprise to me to think that I would one day be thinking about how much I really loved that old tree.

Andrew Malekoff is the executive director of North Shore Child & Family Guidance Center, which provides comprehensive mental health services for children from birth through 24 and their families. Visit www.northshorechildguidance.org to learn more.