A Speck In The Sea

On July 24, 2013, John Aldridge was all alone, keeping watch on the deck of the Anna Mary, a fishing boat stationed in Montauk. It was about 2:30 a.m. when he fell overboard, 40 miles off the coast of Long Island.

“My crew was asleep and I was getting the boat ready to fish for the next day. We had just gotten a new refrigeration system so I was in charge of tinkering with it,” said Aldridge, a Montauk lobster fisherman who was on the back deck of the boat. “I was moving one of the coolers, which had about 150 pounds of ice inside, and the handle broke off.”

Before he knew it, Aldridge was sent flying off the back of the Anna Mary, plunging into the ocean. Like a scene from a movie, he surfaced and watched helplessly as the boat sailed away in the distance. A slice of moonlight would have been enough for his crew to see him screaming and panicking below. The water temperature was fairly warm, but a four-foot swell after a storm didn’t improve Aldridge’s situation.

“The will to live is everything. I wasn’t going to die and I made my mind up. I had to get in that mindset,” said the seasoned sailor and fisherman. “We live on the ocean out here, so for me, I’m comfortable out there and I’m in tune with what’s going on in the ocean and on the ocean.”

After assessing his situation, Aldridge soon discovered that his fishing boots were buoyant. Strategically, he removed them and caught an air bubble in the leg of the boots, enabling him to tuck each boot under his arms to float. That’s when he started to think of a way to get out of his predicament.

“I knew where I was in the ocean; near other people’s fishing gear. My train of thought was to go find these buoys, but it didn’t do me any good holding on to them because the current pulled me under since they’re tied to the bottom of the ocean,” he said. “The boots were my life savers and the water inside them paired with my body heat kept me warm.”

Aldridge’s partner, Anthony Sosinski, awoke a little after 6 a.m. Aldridge had already been in the water for almost four hours. After realizing that his partner was missing, Sosinski began a massive search, calling on the U.S. Coast Guard and local Montauk fishing community to help.

“This community is unbelievable and no matter who you are, if you’re part of this community, everyone comes out to help,” said Aldridge, thanking all of those who helped in the search. “It makes you feel like you’re a part of something really good. No one hesitated a bit. They spent hundreds of dollars on fuel just to look for me.” 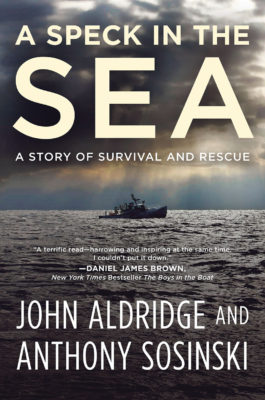 When it came time to write down their harrowing experience, Aldridge and Sosinski realized they had two separate pieces of one story to tell. Sosinski had no idea that his friend was still alive and Aldridge didn’t know about the Coast Guard having issues with a rescue program or that some 20 boats were out searching for him.

“After I was rescued, I just gave him [Sosinski] a hug and said ‘that was some scene, huh?’” recalled Aldridge, who had suffered second-degree sunburns and was dehydrated. ““When we got together to write the book, you get to put everything together, you chisel away at it and it made for a pretty interesting experience.”

While Aldridge sometimes feels defined by the story, he said that talking about it so often has helped him get through issues. He said the experience didn’t hold him back from returning to the Anna Mary and that mentally, he never had a dream about that night.

“It’s weird because it was an unbelievable experience to go through. They say it was only 12 hours and that the Coast Guard has never found anyone alive that has fallen off the boat in the middle of the night in the North Atlantic,” said Aldridge, who met the Coast Guard swimmer that saved him two weeks ago.

It has been almost four years since the accident and rescue, and the Anna Mary is still at sea, only now, with a whole new set of safety precautions in place. Aldridge said that the crew added a tailgate on the back of the boat, similar to that of a pickup truck, as well as several emergency position-indicating radio beacons (EPIRBs), which signals the Coast Guard when someone falls overboard, alerting them to the vicinity.

A Speck in the Sea: A Story of Survival and Rescue (Weinstein Books) debuted this week. The book is soon to be a movie, with shooting planned for summer 2017. Aldridge and Sosinski are part of the consulting team and are excited to see everything come to fruition.

“You fight for every inch of your life to try and stay alive and I just resolved to myself that I wasn’t going to die out there because it’s so powerful…negative thinking,” said Aldridge. “We’re simple fishermen, and we’ll keep fishing until our bodies can’t handle it anymore.”