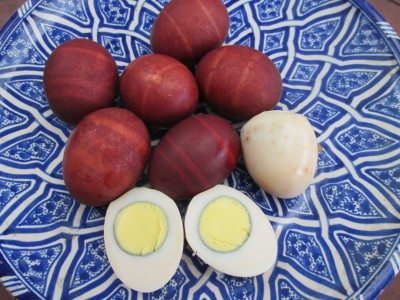 When the “Kosher for Passover” products start appearing in the supermarkets I head to the dairy case to buy a dozen white eggs. They have to be white, but soon I will turn them into brown as I prepare huevas hamanidos, a typical dish of Sephardic Jews, that is especially popular during Passover.

They will simmer for hours in a big pot of water to which I have added papery red and yellow onion skins. As the eggs cook, the onion skins dye the shells a gorgeous brown to mahogany, sometimes leaving interesting stripes on the eggs. Meanwhile the white of the egg is turning a pale brown and the yolks are getting more and more creamy.

As a child, during Passover this was my breakfast every day—two eggs and matzoh slathered with lots of cold butter—difficult to do without breaking the matzoh, sprinkled with salt.

The eggs would sit on the stove all week, reheated when we wanted them, turning darker and darker. I can’t imagine how we didn’t die of food poisoning—if we thought about that at all, we probably assumed that reheating the eggs before we ate them would kill off any bacteria.

My mother was a Sephardic Jew and her traditions differed somewhat from my father’s who was Ashkenazi. The Sephardim are those Jewish refugees who found asylum in the Iberian Peninsula after the First Holy Temple in Jerusalem was sacked by the Babylonians. In 1492, after a Gold Age of poetry, philosophy and learning, the Jews were expelled from Spain and ending up in far-flung lands in northern Africa, the Mediterranean and the Middle East. My mother’s ancestors settled in the part of Serbia that became Yugoslavia. Her family emigrated to the U.S. in the early part of the 20th century when she was five years old. Instead of Yiddish, my maternal grandparents spoke Ladino, a language based on Spanish and Hebrew—my grandparents were called Nonu and Nona. And I much preferred my Nona’s Mediterranean-style cooking to gefilte fish and stuffed cabbage.

While I remember my Nona’s food very well, I don’t remember what was served during the Passover meal. That’s because I was preoccupied with the afikomen, a practice found at both Sephardic and Ashkenazi seders. A piece of matzoh, wrapped in a napkin, is hidden with one of the adult participants. We children spent the Seder stealing the matzoh, each aided by an ally—mine was Nonu who was partial to me as the only girl. At the end of the meal Nonu would “buy” back the afikomen. There is much significance behind the afikomen but basically it served to keep the children happy during the long service. I can still hear my mother saying, “Come on, pops, and move it along; we’re hungry.”

Nonu died when I was 11 and the seder moved to my Ashkenazi grandparents and the food changed. I called my older cousin Jerry to see what he remembered of Nona’s meal. He confirmed that her haroset, the sweet paste that symbolizes the mortar used by slaves in Egypt, included dates and figs along with the typical apples and nuts found in the Ashkenazi preparation. And that Nona used matzoh meal instead of dough to make her wonderful meat and spinach pies.

I spoke with Rabbi Ira Rohde of Congregation Shearith Israel in Manhattan to find out more about the food. Often called the Spanish and Portuguese Synagogue, Shearith Israel is the oldest Jewish congregation in the United States, established in 1654. As a general rule, Rabbi Rohde said, Ashkenazi took on strictures of not including any kind of grain or legume that could make any type of flour—the five classic grains of wheat, barley, rye, oats and spelt.

Amongst the Sephardim it varied and many completely allowed other grains such as millet and rice. “The food depends upon the community,” says Rabbi Rohde. For example, he says, the Moroccan Sephardic Jews don’t eat fish during Passover because pieces of bread were used as bait.”

No matter the customs and the food served, the Passover Seder is universal for all Jews following the Haggadah that tells the story of the Jewish liberation from slavery in Egypt following the Biblical stricture in the Book of Exodus to educate the next generation.