A Moon Landing To Remember

Cradle of Aviation to celebrate Apollo 11 with Moon Fest

The collection that the Garden City-based Cradle of Aviation has in terms of air and spacecraft is expansive. Some might even dare to say it is out of this world.

“We have 75 planes and spacecraft in the collection, so it takes you through its eight galleries and it takes you through more than 100 years of history tied to the region,” said Cradle of Aviation president Andrew Parton. “Everything we have is tied to Long Island and the metropolitan area in terms of either the aircraft or spacecraft that was built here or a milestone that was created here, which is why we have all the Apollo artifacts because Apollo was built here.”

Since landing on the moon 50 years ago, the historic Apollo 11 mission is being celebrated throughout the country. However, nothing seems as impressive as what the Cradle of Aviation has planned for the anniversary with its Moon Fest that is planned for Saturday, July 20.

“It’s a fun family festival,” explained Parton. “We’re going to have astronaut counters with a couple of shuttle astronauts who grew up on Long Island, so people can be able to meet, take photos and have autographs with them.” 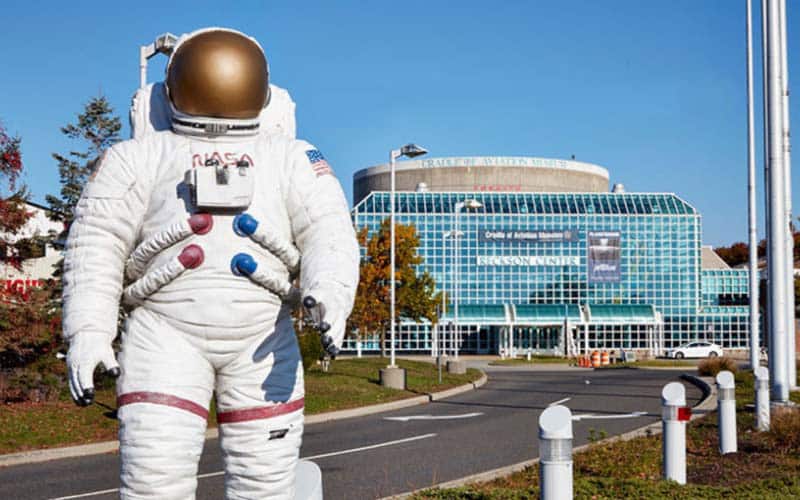 Expected to come out for the celebration are space shuttle astronauts Bill Shepherd of Babylon and Charlie Camarda of Ozone Park, as well as astronaut Bob Cenker.

“We have model rocket launches outside in the parking lot for kids,” said Parton. “We’re going to have solar telescopes where people can safely look up at the sun, assuming it is out that day. Also people will have the opportunity to see the Apollo IMAX movie, which will run on the hour. At 4:17 p.m., which is the actual time of the landing 50 years ago, we’re going to do a countdown and lower a third-scale model from the ceiling to the ground timed to the exact moment the astronauts landed on the moon, so it’ll be like New Year’s Eve with the countdown.”

In addition to that, the Cradle of Aviation will have an exhibit that will run through the middle of August called Journey to Space.

“It’s a lot of interactive things for kids about going back to the moon or going to Mars or just space travel in general,” said Parton. “We have the flight simulators that the astronauts trained on (they trained at both the Kennedy Space Center and at Grumman). We have a lot of artifacts that are related to Apollo with something flown on every mission and we also have a replica of the clean room where they built and designed the lunar modules. In that room, we have the actual first lunar module built, which was the test article so you can see a lunar module that is fully loaded as well as one without its skin.”

Tickets for Moon Fest can be purchased at www.cradleofaviation.org/apollo or call 516-572-4066. Discounts for Grumman retirees and museum members. Proceeds benefit museum education and preservation programs.