A “Lifer” On The Beach

“Will you be bored if there aren’t any matings” my wife asked me as we walk a Longboat Key beach heading into a stiff breeze? There have been a number of matings of royal terns and a few sandwich terns last week but none in recent days. This morning there’s only a desultory group of royals that simply look tired. Maybe they’ve all mated, paired off and thinking about incubating eggs.  “No,” I tell her, “I want to walk into the teeth of this,” meaning the stiff breeze. Having had enough of the wind and with the sky starting to show streaks of pebbly clouds, she decides to go home.

Walking the south end of this beach I discover that black skimmers, who I haven’t seen for a few weeks are bunched up in a group of forty next to forty willets.  The skimmers will be here for the day socializing. For now, these willets are done feeding but twenty other hungry willets eat on at the water’s edge.

By mid-morning, walking toward the other end of the beach there’s a large black bird high up whose 90-inch wingspan make the magnificent frigatebird hard to miss. That wingspan is as wide as an NBA center is tall. The tapered wings bend out like a parasail allowing this sky giant, nicknamed the man-o’-war bird, to glide. All black, it’s a male and disappears going toward Sarasota Bay. I’m not at all bored. In fact, I’m about to go into excitement mode 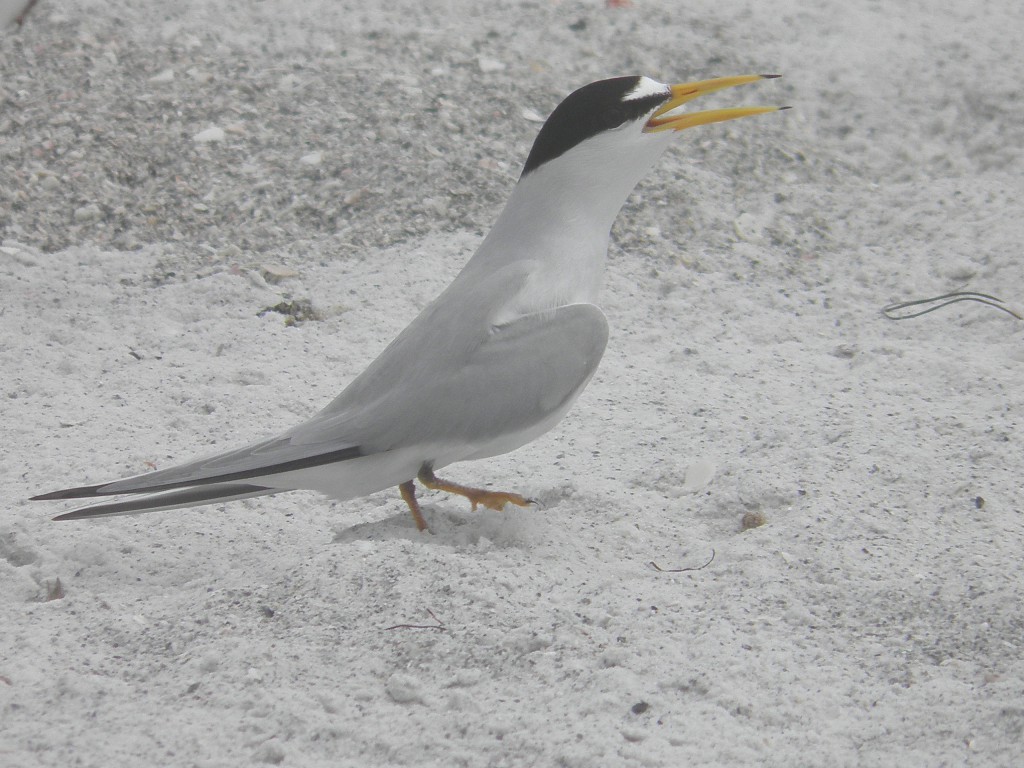 On a lightly traveled part of the beach a few sandwich terns are mixed in among the royals. At the edge of the group there are some small slender terns that aren’t Forster’s terns. Theses tern are smaller than the Forster’s and have yellow bills They can only be a bird that I haven’t see in twenty-five years, the least tern. The least tern is so called because it is our smallest tern at 9-inches. For all practical purposes, this is a “life bird,“ one that I’ve never before seen. This simply doesn’t happen often.  Stunned and juiced I start noting its characteristics.

They all slowly go sidewards at the first hint of my approach, doing this repeatedly. I don’t want them to fly and stay comfortably away. Very skittish. I note their distinctive features: black cap that curves on forehead, yellow bill, indistinct color of legs.  I want pics and will have to go home for my camera. I think there’s a good chance these lifers will still be here when I return. They’re here when I get back.  After taking what I can I leave, lucky to have gotten within twenty-five feet of them.

Returning again, the leasts are still here. Now I’ve the luxury of just looking at them. One feature stands out like a beacon. Their faces and forehead are ultra bright white compared to their less white breasts and light gray backs. They have a habit of lifting off low into the air and veering off remaining not far above the ground. They don’t land far away, remaining nearby. Later they go toward another group of different terns but remaining on the group’s fringes. When they lift off and go above a wave, their small tightly oval shaped bodies almost seem to hang in the breeze. I’m intrigued by their bright yellow bills and the black pattern on their face. The reason these leasts are here is that they are probably winter migrants returning from as far away as Brazil. Their delicate beauty has led to a number of nicknames. My favorites are sea swallow and pigeon de la mer.

The original small tired looking group of royals has become enlarged by a big group of black skimmers that have joined them. At first I hear a great deal of squealing and then see a male standing on a female’s back. I don’t have my camera ready and when I do it is difficult to locate the couple in the group but I do get a picture with the male holding its wings out for balance atop the female.

At the south end of the beach I again hear noise coming from a group of royals. Another mating. This one lasts perhaps thirty-seconds. Either it was a “trial run” or an inept male with an uninterested female. I’m thinking the latter when he tries to get back on her but she walks away and he doesn’t follow. I’m starting to believe that with royals, no means no and that the coupling has to be mutual.  I’ve not seen a male try to force itself on an unwilling female which I find very interesting. Is this because they are “hard wired” not to do so or is it unacceptable behavior among the group? Inwardly I can’t help but chuckle. It’s all so haphazard, so hit and miss, like people. Yet here we all are.

Starting to come off the beach I see four common ground doves on the sand by beach vegetation. I’d like to get some pics of these against the sand which will make a nice background. Ground doves are about the size of mourning doves but darker and have orange legs and bills. They walk slowly on the ground and fly little and not too far. The problem trying to photograph them is that while the doves walk slowly, they are in constant motion. Hugging the plant perimeter, they offer no contrast to the dark background nor a profile. Entering the lush grass they disappear like the “ghost” ball players in the film Field of Dreams vanishing into an Iowa cornfield. At home I show my wife the pics of the least terns, the mating royals gushing about what I’ve seen. I’ll take a “boring” morning like this every day.