Rhythm and blues from the past six decades has provided a treasure trove of songs that have spurred a cottage industry of artists releasing albums consisting of material drawn solely from the vaults of labels like Motown and Stax/Volt. And while that approach can provide diminishing returns as each year passes and more and more of these tunes get trotted out, it’s more rewarding when you have someone who looks to tap into the spirit of R&B versus just becoming a human jukebox.

So it goes with A.J. Croce, whose latest album Just Like Medicine draws inspiration from the soul of southern music tradition. Produced by esteemed Muscle Shoals-based songwriter Dan Penn (“Dark End of the Street,” “Do Right Woman, Do Right Man”), this collection finds the piano-playing Croce serving up 10 originals that channel everyone from Dr. John (opener “Gotta Get Outta My Head”—a spiritual sibling of Mac Rebennac’s “Walking on Gilded Splinters”) and Randy Newman (the jaunty “Full Up”) to Professor Longhair (the punchy, horn-soaked “The Heart That Makes Me Whole,” featuring some crispy riffing by storied guitarist Steve Cropper).

“I think the whole idea was to do a soul album, but let’s not cover anything, even if we’re working with legendary soul artists like Steve Cropper, Dan, David Hood, the Muscle Shoals Horns or any of the people that joined the party,” Croce said. “Let’s just make sure that we make it original and make an honest sincere record. I think that’s what soul is all about—sincerity.” 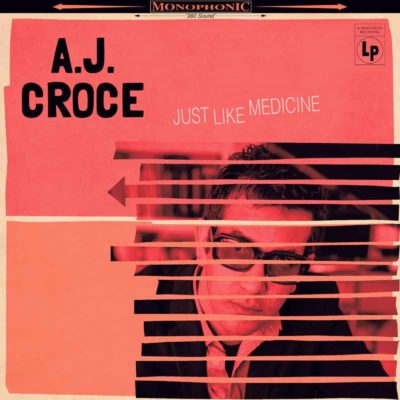 Croce, who has always had an affinity for soulful pianists like Ray Charles and Mose Allison, got the ball rolling when he asked Penn to collaborate following a show the latter performed at the Nashville outpost of City Winery. What started out as two songs, (“The Other Side of Love” and “Cures Like Medicine”), evolved into the idea of a full-fledged project recorded in mono over the span of three days. The decision to go old-school with the recording process was something Croce embraced, as did Penn, when it was suggested.

“When we recorded those first two songs, we kind of ran out of tracks and I said we should approach it like a record Dan would have done in the past,” Croce explained. “I know mono sounded crazy to him, because it’s the world he came out of and he lived in a stereo world for a long time, but he totally understood it. I figured that if you’re going to listen to something that’s the equivalent of a transistor radio, it would sound best in mono.”

Having lost his famous singer-songwriter father Jim at the age of 2, the younger Croce found his own musical way while being raised by mom Ingrid, who herself had been part of a folk duo with her late husband. And while he didn’t get to really know his pop, the Pennsylvania native does get to connect on his current album thanks to the song “Name of the Game,” which was a previously unreleased song by his pop that was slated to appear on 1973’s I Got a Name, the late musician’s last album.

“When I brought songs in [while recording], I never told Dan who I co-wrote with or who wrote the song. I’d just tell him to check this or that out. That happened right up until the day we recorded that song of my dad’s, which I just thought was a soulful song that I had on a cassette,” Croce said. “I sort of heard it for the first time in my early 30s. ‘Name of the Game’ was one of the last songs that he wrote and so it was kind of an opportunity to collaborate with my dad in a way that I probably won’t have again in that same way.”

For his current tour, Croce’s sidemen include veteran bassist David Berard (Dr. John; Allen Toussaint), drummer Gary Mallaber (Van Morrison, Steve Miller) and up-and-coming guitarist Garrett Stoner. And while he’ll be mixing in music of his father and his own 25 years of recording, he’s promising to throw in plenty of surprises that came from a childhood spent delving into artists ranging from Mississippi John Hurt and Woody Guthrie to Otis Redding, Sam Cooke and Solomon Burke.

“I was more influenced by my dad’s record collection than I was by him. Not that I didn’t love his music, but it was just one of those things where I lost my sight at a young age and I got turned on to Ray Charles and we had a piano at the house. As I was sort of getting my sight back during that period, it was a great way of getting a certain sense of confidence to be able to play music and it came naturally,” he said. “What can people expect? A really energetic show that will have people coming away and asking what just happened. They knew all of my dad’s stuff and they may or may know something of mine. There might even be covers of things they were unaware of having been done by certain people—that’s kind of what makes it all so much fun.”

A.J. Croce will be appearing on April 27 at the YMCA Boulton Center for the Performing Arts, 37 W. Main St., Bay Shore. For more information, visit www.boultoncenter.org or call 631-969-1101.

Be sure to check out A.J. Croce’s Fave Pianists: