Although dark roots and grays might already be peaking through, the good news is that filler lasts six-to-nine months.
Read more
News

How many times has your doctor told you to put the spoon down and stop eating ice cream? Probably too many times.

Well, New Yorker Michael Shoretz was determined to prove everyone wrong. He knew there had to be some way to make this delicious treat healthier than it was.

“When my father was diagnosed with type II diabetes, I was a senior in high school,” Shoretz said. “At that time, I became a lot more interested in health and nutrition. I ended up going to college to study health policy. I wrote my senior thesis on calorie-posting requirements in restaurants before calories were required to be posted in restaurants.”
Upon graduation from Brandeis University, Shoretz debated what to do with his life, unsure what path to take. After considering a career in health policy, he ended up becoming a personal trainer.

That’s when the idea of creating a healthy form of this delicious treat popped into his head.

“What I found was my clients all struggled with the same thing, no matter what their background was, which was trying to balance healthy and indulgent eating with a desire to live healthier,” he said. “I remember coming in for a 6 a.m. training session and one of my clients was telling me, ‘I just ate a pint of Ben & Jerry’s last night. How long do I need to be here to work this off?’ It got me thinking that if I could start focusing on the food side, I could help more people.”

So Shoretz did what any young entrepreneur did: He went to his mom’s house and purchased an ice cream maker from Bed, Bath and Beyond. With the assistance of his mother, Carol Finkelstein, and sister, Lily Shoretz, the trio began experimenting with healthier and tastier recipes.

Eventually, Enlightened Ice Cream was created. The “original taste testers,” as he calls them,” are now president and director of marketing, respectively, of Beyond Better Foods.

“When I first started, it was my mother, sister and I,” Shoretz explained of Enlightened, which launched in 2012. “We would distribute the ice cream ourselves. We didn’t own a car, so we would rent one. I had a cooler bag that I’d run around with in store-to-store. I was racing against the clock, making sure the ice cream didn’t melt going from our freezer to the store’s freezer. The way we’ve grown, we now have a great team and distributors across the country. It’s been a learning process.”

From delivering ice cream himself to now having this healthy ice cream in every single state. Shoretz has been so successful that he was featured in Forbes’ annual 30 Under 30
list in 2017.

“Our goal, as a brand overall, is to have really good ice cream,” Shoretz said. “It’s not only delicious, but you can feel great about eating it.”

After starting out in his mother’s kitchen in Manhattan, Enlightened and the umbrella brand of Beyond Better Foods, moved to the Bronx. For the last three and a half years, they’ve gradually expanded to become the go-to ice cream for plenty of hungry consumers.

“The key was trying to reduce sugar as much as possible and increase protein and fiber, reducing calories overall while making a product that’s still ice cream without all of the sugar,” Shoretz said of the journey. “It was a long and slow road. It wasn’t a business at first, but a fun project. We slowly morphed it from a hobby into what became a real business.” 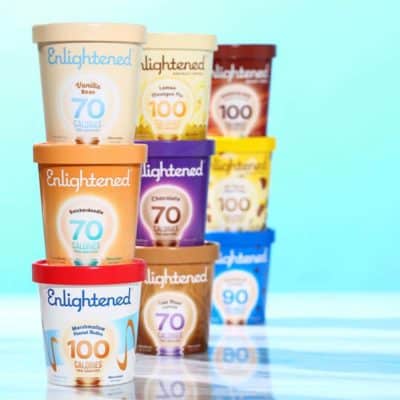 Fast forward to 2019 and Enlightened provides diet-specific ice cream, from its regular low-calorie treats to dairy free, as well as the Keto collection, which is meant for those who eat a low-carb, high-fat diet.

The Enlightened products are a great alternative for those trying to live a healthy life, and while eating it, you won’t even realize that it’s not the usual calorie-consuming ice cream. And the variety of flavors is unique, as well, including a movie night popcorn flavor to red velvet, chocolate glazed donut, butter pecan and more.

Previous articleFun Things To Do For The Holidays Around Manhattan and Long Island
Next articleOh, Christmas Tree