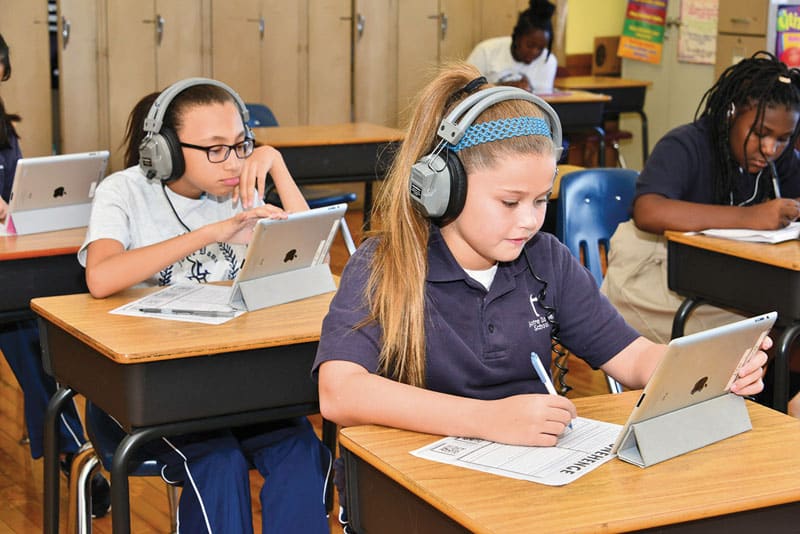 This school year, 10 Catholic schools in the Diocese of Rockville Centre decided to take a different approach to studying languages other than English. They have augmented their traditional foreign language program with Rosetta Stone, a computer-based learning program. The Rosetta Stone program allowed these schools to offer greater flexibility in their school’s curriculum. Students could choose to study any one of a variety of languages which include but are not limited to Italian, Spanish, French, Polish and Chinese. Many students are even studying Latin, which is at the foundation of many European languages and has become a popular choice in some of the schools.

The Rosetta Stone program is computer-based and gives students the opportunity to acquire a second language while further developing their computer skills. Rosetta Stone provides students with a sense of autonomy, allowing them to progress through the units at their own pace. Students in the same class can learn different languages and share what they learn with their classmates. Students are encouraged to become critical thinkers and observe similarities and differences in their chosen languages and the languages studied by their classmates.

“The program’s immersive learning style and the immediate feedback contribute to a sense of pride and independence for our language learners,” said Mina Woodward, a language teacher at Notre Dame School. “My students are enthusiastic and look forward to logging in each day.”

In addition to working on the program in school, students can work on activities and games at home on mobile devices.

Anthony Biscione is the Assistant Superintendent of Curriculum for the Diocese of Rockville Centre.