As he pushed down on his T-shirt press years ago, Darren Meenan’s wrists hurt, but his ambition thrived. From the dark basement of his parent’s house in Douglaston, to his new location on Nassau Terminal Road in New Hyde Park and a kiosk store at Citi Field, Meenan’s passion remains focused as he continues to produce high-quality New York Mets’ merchandise for his company The 7 Line, an independently-owned pro sports clothing giant.

A former BMX rider, Meenan learned to screen-print T-shirts at St. Mary’s High School in Manhasset to make extra money. That side job quickly turned into a full-time operation.

After graduating from high school in 1998, Meenan obtained a shirt press that was housed in his parents’ basement during the infancy of his clothing empire. That press sits in the New Hyde Park warehouse today; a reminder for Meenan of where it all began.

“Everyone needs a T-shirt,” Meenan said of his early days in fashion. “I’d pretty much canvass the neighborhood.”

The idea for The 7 Line came to Meenan in September 2009 during the last week of another lost season for the Amazins. The Mets haven’t had a winning season since 2008, one year after the club had the National League East crown in its grasp before collapsing at the end of the 162-game marathon. The 7 Line officially launched on Opening Day 2010.

“[2009] was another disappointing year…we weren’t making the playoffs; everything was spiraling back to 2007,” he said. “I made a shirt that said ‘I Survived.’ It was kind of like a bumper sticker. But people liked it. During that offseason I decided to launch a website.”

Meenan’s obsession with the Mets ignited at an early age when his grandfather, Bill, worked as the media gate supervisor at the now defunct Shea Stadium. He would regularly get autographs of Meenan’s favorite ballplayers. 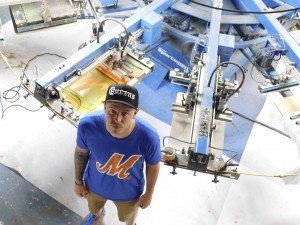 “I was going to games before I could walk or remember where the hell I was,” Meenan said. “Going to visit grandpa was not just going to a sporting event. That definitely molded me into the fan I became because I was [at Shea] so much.”

Waiting anxiously in his grandfather’s office was routine for Meenan. He wouldn’t know if he’d end up behind home plate to watch Flushing’s finest or meet a player.

What started off as an obsessed fan, turned into a T-shirt maverick and word-of mouth-business —is now growing toward a major enterprise.

“I always knew how to make T-shirts,” Meenan said. “I had a sense of the business but never really went for it [at first] as far as baseball is concerned.”

On Opening Day of the 2014 season, The 7 Line debuted a kiosk store at Citi Field following a licensing agreement with Major League Baseball. The business that printed in a basement and distributed out of a backpack at the stadium, now requires a printing warehouse in New Hyde Park with an automatic order-processing system. The popular hats and accessories they sell are produced elsewhere.

The shirts are printed in a large room, full of loud and hot printers that churn out attire for multiple clothing brands. Meenan and two full-time employees operate from another room in the back of the warehouse.

This is where Lizy Saroyan, who claims the unofficial role of warehouse manager, checks and returns emails, processes orders and does “anything that Darren doesn’t.” Consistent with what Meenan described as his “No Plan, Plan” for The 7 Line, Saroyan’s title isn’t set in stone and her work varies by the day.

On their least busy day, Saroyan said there could be as few as 100 orders, but on their most frenzied day she will come in to find thousands waiting to be answered.

“We recently changed our system so we can process orders in batches now, but I used to do them manually; one-by-one, adding up how much each item order weighed before shipping them out,” she said.

Meenan doesn’t pay for any marketing, relying entirely on word-of-mouth and a strong social media presence.

“I’d go to games and talk to people, hang out on the Shea Bridge [in right center field],” Meenan said. “The whole idea is to go to more games, create a fun atmosphere and do it ourselves. There’s three of us [in the office]. We make the decisions.”

They create that fun environment through their group outings, where they purchase hundreds of tickets in the same section at home and away games and sell the tickets as part of a package that includes 7 Line shirts. The outings at opposing teams’ stadiums, where hundreds of fans can be seen donning the same blue or orange shirt, have caught the attention of teams the group hasn’t visited yet.

“A marketing guy with the San Diego Padres already reached out to me asking when we would be coming there,” Meenan said.

While R.A. Dickey was going for his 20th win of the 2012 season, The 7 Line Army was on its first group outing—bonding like a growing family. Since the inception of the group’s excursions, the regulars have developed relationships with one another that go beyond the ballpark.

“It’s not just a baseball game to us,” said Meenan. “It’s a family; it’s a community. It’s people we see all the time and hang out with during the offseason.”

When the season’s schedule is released, Meenan decides when he’s going to hold The 7 Line’s outings, releasing the dates at the7line.com; immediately, they all sell out.

“I appreciate and enjoy the sub-culture Darren and those guys have created among Mets fans,” said Dylan Blanke-White, a frequent 7 Line Army member. “It totally enhances the experience of going to a Mets game.”

The outings continue to grow as the brand expands. The first outing on the last day of the 2012 season—when the Mets were out of playoff contention—drew 560 people. The next four outings in 2015 include Colorado, Baltimore and two games at home were sold out within an hour with 500-800 people attending.

Recently, the group has taken their outings on the road, visiting nearby ballparks, filling the stands with 7 Line faithful. When the Mets play the New York Yankees, they swarm Yankee Stadium for their annual “Bronx Invasion.” Around 1,500 people attended this game with The 7 Line.

Meenan expressed that going to a game with The 7 Line is an experience for any fan of any age or background. He remarked that it’s about making the experience fun and exciting. They are constantly on their feet, jumping and yelling—cheering even a minor base hit.

For Meenan, it all goes back to keeping the dream alive and printing.

“It easily could’ve failed so many times, but I’m just so hard-headed, I couldn’t let it fail,” Meenan said.