3 Reasons To Go Independent With Your Career In 2016 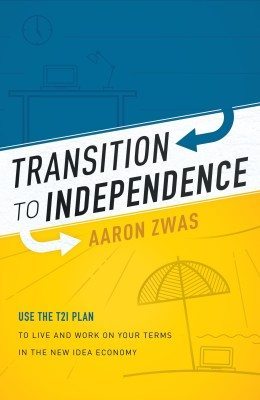 It’s nearly bedtime, but you find yourself sitting at your laptop finishing a report the boss expects in the morning.

Your daughter’s soccer game starts in five minutes, but you’re a 30-minute commute away.

More and more, the modern work world infringes on home life as professionals try to balance their career needs against personal time, and end up feeling dissatisfied, frustrated and exhausted.

“In our modern culture, we are time poor, with too much focus on work and not nearly enough time for life,” said Aaron Zwas, an independent consultant and author of Transition to Independence (www.t2iplan.com).

That’s all the more reason to take the reigns of your career, becoming your own boss and adding flexibility to your work-life balance, he said. It all adds up to a new level of freedom to pursue the things that matter to you most.

Zwas knows from experience. He once worked as a technical writer for a computer-software company, but a series of events led him to make the break from his corporate job and venture out as an independent consultant. That allowed him to set his own schedule and work from home, all the while increasing his income by an average of 25 percent a year.

Plenty of people can benefit from working independently, though for reasons as varied as their circumstances, he said. They include the 20-something college graduate; the mother or father with young children who wants more flexibility; a stay-at-home mom returning to the workforce; or a middle manager recently laid off in the company’s latest down-sizing move, just to name a few.

“This is not about making $1 million,” Zwas said. “This is about improving your quality of life. It’s about pursuing your passions, whatever they might be, while still being able to pay the rent.”